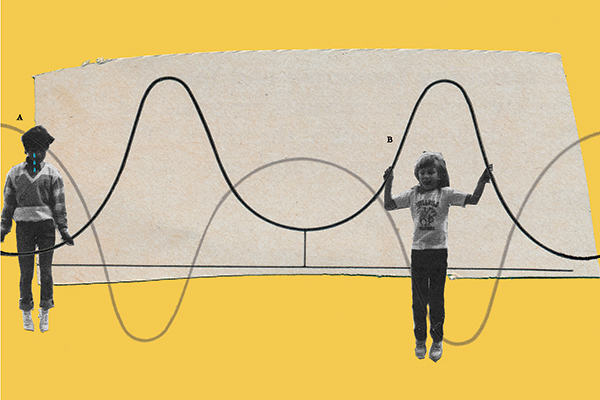 Researchers gain insight into how emotion-tinged memories are stored in the brain.

Imagine yourself on the warm, white sand of a tropical beach. As you listen to the lapping waves and inhale the salt-scented air, you form a memory that can summon a feeling of contentment for years to come. But if a destructive hurricane roars in and ruins your vacation, remembering that same beach in the future might evoke anxiety or fear. Can you rewire your memory post-hurricane, ensuring that white sand and salt air will continue to evoke positive feelings?

Perhaps. “Emotion is intimately associated with memory of past events, but the [positive or negative] valence of memories is actually quite malleable,” says HHMI Investigator Susumu Tonegawa. He explains that the brain stores a memory’s contextual information—details about where and when an event occurred—separately from its emotional content. The brain circuit connecting those two components can be rewired, giving the memory of an event a new emotional association, he says.

There’s evidence of that malleability in the success of psychotherapies that help people overcome anxiety or depression by summoning positive thoughts to replace negative ones. Tonegawa, a neuroscientist at the Massachusetts Institute of Technology who studies memory in mice, wanted direct evidence of how the brain makes such a switch. So he and his colleagues, research specialist Roger Redondo and grad student Joshua Kim, devised a strategy to replace an animal’s fear of a specific place with a positive memory of the very same location.

Emotion is intimately associated with memory of past events, but the [positive or negative] valence of memories is actually quite malleable.

They succeeded. What they discovered helps explain the connections between different components of memory and how altering those connections might reassign a memory’s emotional value. “We’ve provided some scientific basis for already ongoing psychotherapy and found a target in the brain for future therapies,” he says.

Tonegawa and his colleagues first created false memories in mice in 2013. They placed mice in a safe environment, then made the brain cells storing the memory of that place sensitive to light, a feature the researchers could use to activate the cells. When they switched on those cells in a mouse exploring a perilous new space, it caused the mouse to fear the original environment. So they knew they could attach emotion to a memory that previously evoked neither fear nor pleasure. But once an animal had developed fear of a place, could its memory of that place be made pleasurable instead?

To find out, Tonegawa’s team placed male mice in a chamber whose floor delivered a mild shock. The scientists had previously introduced a light-sensitive protein into the rodents’ brain cells that stored information about the dangerous place. As in their 2013 experiments, they did this by linking production of the protein to a gene that is switched on as memories are encoded, thus restricting light sensitivity to the precise cells that stored the newly formed memory. They further restricted the light-sensitive protein to one of two regions of the brain—the hippocampus, where contextual information about a memory is stored, or the amygdala, which houses a memory’s emotional content. Then they removed the mice from the uncomfortable chamber. 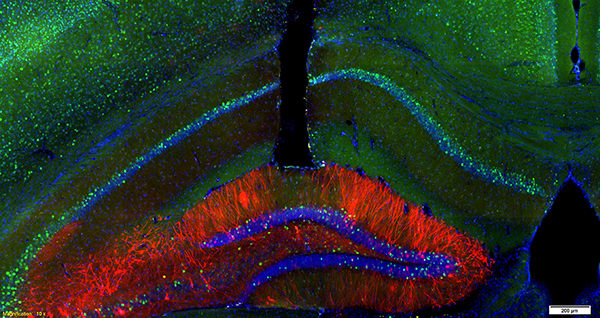 A few days later, the scientists artificially reactivated the memory by shining a light on the animals’ brains. The mice stopped their explorations, freezing in place—typical fear-based behavior.

To try to overwrite that fear, the scientists placed the mice in a new environment. Instead of electrical shocks, pleasure awaited: the new cage held female mice. As the mice mingled, the researchers reactivated the male rodents’ memory-storing neurons. They switched on the cells responsible for the original fear memory one set at a time—in some mice, they activated cells in the context-storing hippocampus; in others, they triggered memory cells in the emotion-storing amygdala. Then they tested what emotions the animals now associated with the original chamber.

The results were striking. When the scientists reactivated the amygdala component of the original memory during the pleasurable encounter, the male mice retained their fear. But when the researchers reactivated the memory-storing hippocampal cells while the mice interacted with females, the memory of the original chamber acquired a new emotional association. Now the mice sought out environments that triggered the memory. When they put the animals back in the unpleasant environment, the mice explored without hesitation. “The original fear memory is very much lost,” Tonegawa says.

The researchers found similar results when they switched the emotion of a memory in the opposite direction, replacing a pleasurable memory with fear.

By locating regions of activity in microscope images of the animals’ brains, Tonegawa’s team concluded that a set of hippocampal neurons stores contextual information about a memory and connects to either of two sets of amygdala neurons: one responsible for positive memory, the other for negative memory. The memory-altering experiments rewired those connections after they had been established.

The study, published September 18, 2014, in Nature, confirms that brain circuits that attach negative emotion to a memory are not permanent. Further, it identifies a specific part of the brain as a potential target for new treatments against depression and other mental illnesses.

“To target drugs or any other therapy to a particular area of the human brain is a challenge,” Tonegawa acknowledges. “But the technology develops so fast. It’s quite possible that there’s a way of noninvasively manipulating cells’ activity in humans. These kinds of studies with animal models are providing information about how to target those procedures.”