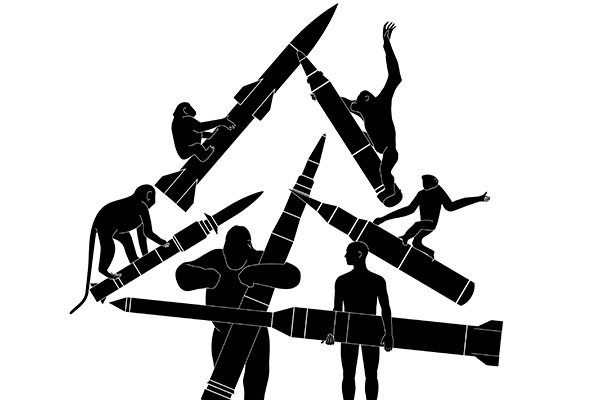 Primates have evolved specialized weaponry to home in on bits of jumping DNA.
illustration by John C.W. Carroll / Gladstone Institutes

Cells have a rapidly evolving arsenal to counter wayward DNA.

For millions of years, bits of DNA called retrotransposons have been duplicating and inserting themselves randomly throughout the genomes of different organisms, including humans. Sometimes the jumping genes alight in places that help species evolve new traits. Other times they do nothing. But all too often they touch down in the middle of a gene, altering the way it’s regulated or knocking it out of commission. Fortunately, as HHMI Investigator David Haussler recently showed, cells have evolved a way to keep these wayward sequences in check.

“Over generations, our genome becomes bloated with copies of retrotransposons,” explains Haussler. “They do damage by disrupting normal genetic mechanisms. Something has to be the security patrol to try and shut these things down.”

In humans, one form of security patrol comes from more than 400 rapidly evolving genes that produce watchdog proteins called KRAB zinc-fingers. These watchdogs scan the genome, clamp onto retrotransposons, and then call on other proteins to silence them.

There is a silver lining in this seemingly endless arms race within our own DNA. Once KRAB zinc-fingers are no longer needed to suppress retrotransposons, many of these watchdog proteins adopt new roles as regulatory proteins, controlling the activity of genes near retrotransposon landing sites.

The Dynamic Genome: An Arms Race With Ourselves
News