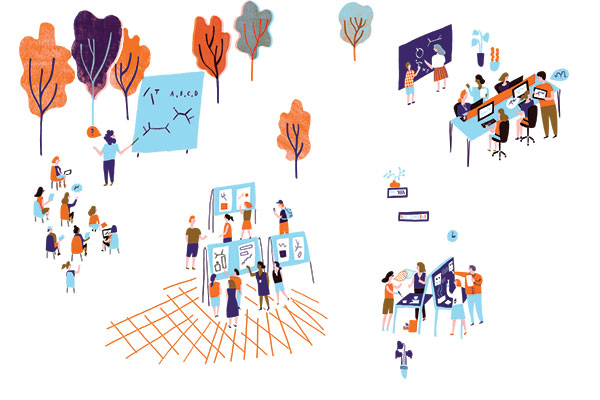 Immersion in the Lab
by Cathy Shufro

An international summer program gives talented Russian high schoolers a taste of life at the bench.

Biologist Fyodor Kondrashov’s lecture on DNA at a Russian summer program went badly. He’d been invited to talk at a Soviet-style encampment where thousands of teenagers were divided into interest groups: a space squad, a sports squad, and so on. Kondrashov would be talking to future mariners.

The sailors had spent the afternoon rowing on the Black Sea. “They docked at the pier,” recalls Kondrashov, “totally tired after three hours of rowing. Their team leaders were like, ‘And now—a lecture on genetics!’ I knew my lecture was ruined.”

But the young sailors’ misery proved instructive for Kondrashov: a year later, when a Russian foundation asked him to help design a biology summer school for super-motivated Russian high schoolers, he made sure the students knew what they were getting into. No one would spring a genetics lecture on them unawares. They’d attend because they wanted to spend five hours a day in a biology laboratory. Furthermore, students would have some choice: they’d request a lab assignment after rotating through six of nine labs.

The Russian-born Kondrashov has now served for three summers as scientific director at the 17-day Molecular and Theoretical Biology School, or “bioschool.” The students, who pay nothing and number from 60 to 80, come from all over Russia—some from elite high schools in Moscow, others from “somewhere in the middle of Siberia.” They gather in August in Pushchino, a research community four hours from Moscow. The scientists, postdocs, and graduate students who run the labs come from Russia, the United States, or, like Kondrashov, Europe; he is an HHMI international early career scientist at the Centre for Genomic Regulation in Barcelona, Spain. 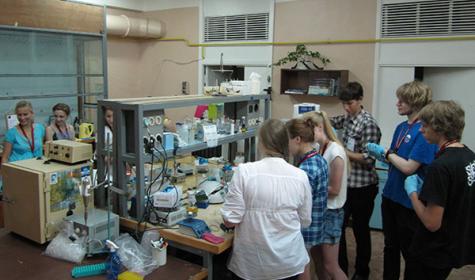 A little more than three years ago, HHMI international early career scientist Fyodor Kondrashov helped create the Theoretical Biology School, or “bioschool,” in Pushchino, a research community near Moscow. The program allows 60 to 80 students from all over Russia to learn biology and do research for 17 days during the summer. Photographs courtesy of Fyodor Kondrashov. Produced by Nicole Kresge. 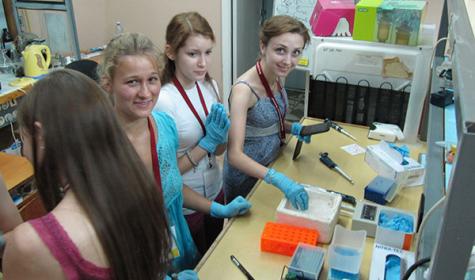 During the first three days of bioschool, students choose several labs to visit in order to decide where they will work. These visits allow them to talk to each lab’s principal investigator and, in some cases, to try basic experiments. 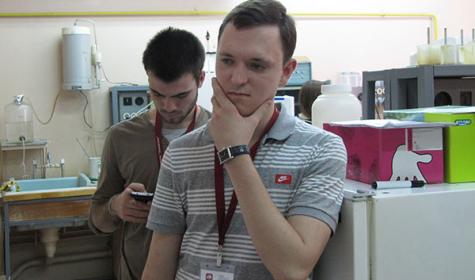 The scientists, postdocs, and graduate students who run the labs come from Russia, the United States, or, like Kondrashov, Europe; he is a scientist at the Centre for Genomic Regulation in Barcelona, Spain. Here, two students work on designing an experiment in a laboratory directed by HHMI International Early Career Scientist José Luis García-Pérez. 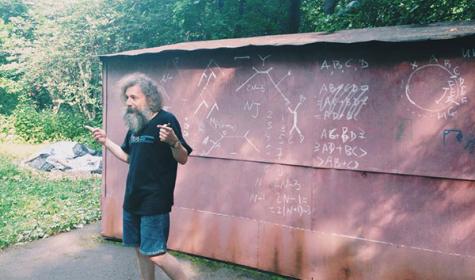 In addition to lab work, the students also take classes. A storage shed serves as a blackboard for former HHMI International Research Scholar Mikhail Gelfand as he teaches a lesson in bioinformatics. 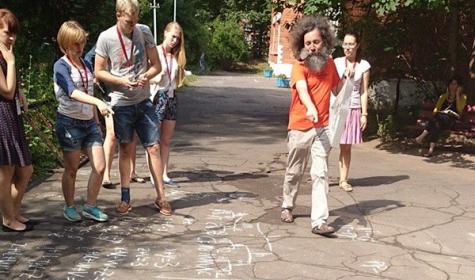 Gelfand, who is a lab head at bioschool, has also been known to use sidewalk chalk to teach students how to derive distances between protein sequences when reconstructing a phylogeny.

On the final day of bioschool students present posters that describe their experiments. For 15-year-old Grigory Khimulya, bioschool was “one of the most important events that happened in my life so far, and I feel like this is the case for most of the kids.”

The students work on real experiments that advance the work of the lab heads. “There’s tons of education literature where they talk about how authentic education experience enhances kids’ motivation,” says Kondrashov. Part of authenticity is seeing how scientists respond when something goes wrong, he says. “If you have a well-rehearsed project, nothing ever is supposed to go wrong.”

The students also experience “the mundane kind of everyday things, like doing a thousand PCRs, because life in the lab can be very boring.” It’s key, says Kondrashov, that “they understand that they like doing the mundane.” That’s especially important in Russia, for when students enter university after 11th grade, their choice of career is nearly impossible to change.

For 15-year-old Grigory Khimulya, bioschool was “one of the most important events that happened in my life so far, and I feel like this is the case for most of the kids.” Now 17 and a freshman at Harvard, Grigory says he loved working on “real research questions with a real principal investigator ... to research something that no one had explored before.”

For many of them, it was the first time they’d ever talked to adults about science outside a classroom.

Grigory worked with José Luis García-Pérez, an HHMI international early career scientist from Spain who studies human transposable elements, or “jumping DNA.” The 10 students on his team proposed testing whether ibuprofen would cause DNA sequences in human cultured cells to jump to new positions within the genome. They discovered that the common painkiller did seem to increase the rate of retrotransposition, and García-Pérez is continuing to study the effect.

All too often, says García-Pérez, students “don’t know what science is until late in college or in graduate school.” But at bioschool, they get a feel for “living in the lab.”

Doctoral student Maxim Imakaev has noticed a stark difference between how Russian and American students view the chance to do research. For the Boston-area high schoolers he supervises at the Massachusetts Institute of Technology, he says, lab work is one among many extracurricular activities—“just another program.” Bioschool students, on the other hand, were ecstatic about doing real research. “For many of them, it was the first time they’d ever talked to adults about science outside a classroom,” says Imakaev. “It showed students that there can be other adults in their lives who respect them, who believe in them.”

That was memorable for 17-year-old Aygul Minnegalieva, who’d never before done a lab experiment but said the bioschool scientists treat students like “you are equal to them. They don’t look at you like you’re just a high school student.”

This was a revelation for Anastasia Goshina, 17: “I was surrounded by people who understood me. I could ask them what they think on biological topics, and they’d give their opinions. We’d maybe argue on things, or agree. I don’t have opportunities like that at my school.” Anastasia—whose graduating class in Togliatti, 1,000 kilometers from Moscow, has just 20 students—keeps in touch with her bioschool lab head and friends via email and social networking.

She plans to apply to university in Moscow. Kondrashov says one measurable outcome of the summer school is how many students are willing to relocate to enroll in the best programs, since it’s unusual for Russian students to do so. Half the bioschool alumni now in university left their hometowns to further their education.

The bioschool will reconvene this summer, funded primarily by the Dynasty Foundation, Russia’s first family foundation, and in part by HHMI.

But “bioschool doesn’t end when the summer ends,” says Grigory. “I’m still part of the network of researchers and students.... I’m in Boston, but I’m still finishing projects for labs in Moscow and Barcelona.”