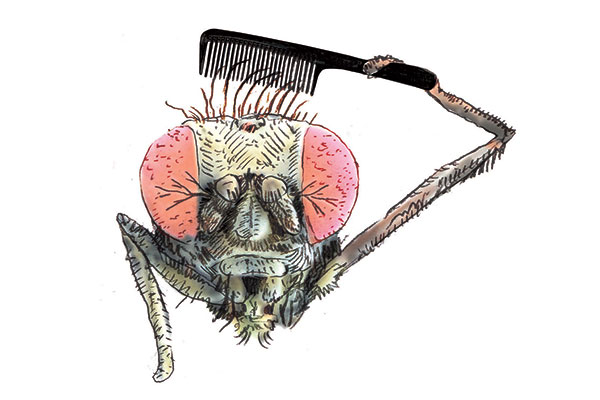 Fruit flies are very fastidious when it comes to cleanliness. A dust-covered fly may spend upwards of 20 minutes removing grit and grime in a habitual sequence that starts at its eyes and ends at its thorax. Studying this structured grooming has helped Janelia Group Leader Julie Simpson explain how the brain organizes sequential behavior.

“You can’t do everything at once,” says Simpson. “How do you manage competing demands on your brain and limbs so that you execute things in order of importance?” As she reveals in the August 19, 2014, issue of eLife, it’s all about hierarchy.

Simpson, postdoctoral researcher Andrew Seeds, and their colleagues devised a way to trigger particular grooming tasks by turning on different sets of neurons. They discovered that dust-covered flies always started their grooming program at the beginning—cleaning their eyes—but weren’t able to progress beyond the point that the scientists switched on. For example, when the researchers activated neurons for abdominal cleaning, the fly would clean its head and then its abdomen but then would continue cleaning its abdomen, ignoring the dust on the rest of its body.

“It progresses through the hierarchy to that particular point, and then it gets stuck,” Simpson explains. This means that earlier grooming steps have the ability to halt those that happen later. These findings may help explain other behaviors that involve sequences of tasks, like nest building in birds.