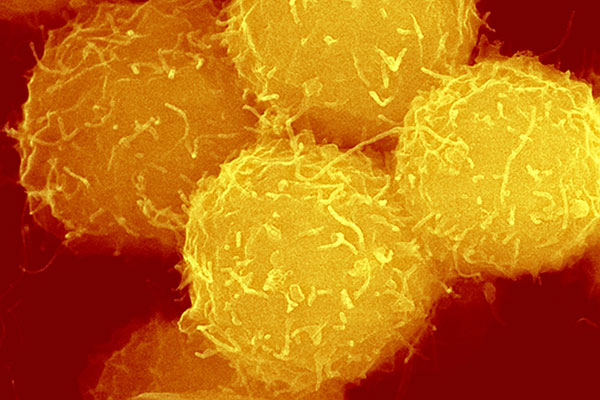 The environment around these hematopoetic stem cells plays a role in cancer formation.
photograph courtesy of SPL / Science Source

In some bone marrow cancers, a stem cell’s surroundings play a surprising role.

Until now, scientists believed that cancer was driven by changes inside cells: genes become mutated, cells grow unchecked, and a tumor forms. But there may be more to the story. New research from HHMI International Early Career Scientist Simón Méndez-Ferrer indicates that, in some cases, what goes on just outside a cell also plays a role in cancer formation.

In a group of bone marrow disorders known as myeloproliferative neoplasms, a defective gene causes hematopoietic stem cells (HSCs) to make too many blood cells. As the blood cells build up, the disease worsens, sometimes evolving into cancer. The only real cure is a bone marrow transplant. However, some transplant patients develop a new bone marrow cancer originating from the donor transplant cells, hinting that something other than the patient’s mutant HSCs are to blame.

Studying the process in mice, Méndez-Ferrer’s team discovered that the mutant HSCs produced an abundance of small inflammatory proteins called cytokines that were damaging nearby neurons. This damage, in turn, prevented the nerves from activating other cells that help regulate HSCs. The end result: unchecked growth of HSCs and the potential of myeloproliferative neoplasms.

“Even though the disease is initiated by a mutated blood stem cell, this stem cell cannot drive the disease until it destroys particular elements of the microenvironment,” explains Méndez-Ferrer at the Spanish National Center for Cardiovascular Research. “First, it has to damage the nerve cells in the marrow.”

When the researchers added an analog of the neurotransmitter adrenaline to compensate for the damaged neurons’ inability to fire, the mouse cells were once again able to control HSC proliferation. The team reported its findings August 7, 2014, in Nature.

Most efforts at treating myeloproliferative neoplasms are focused on blocking the mutant HSCs, according to Méndez-Ferrer. “We showed that an alternative approach might be to protect the niche—the environment—and control the expansion of the mutated cell,” he says. With that in mind, Méndez-Ferrer, Radek Skoda, and other colleagues will soon start a clinical trial to see if adrenaline analogues can be used to effectively treat patients with myeloproliferative disease.