Mapping a fly brain reveals clues on how it sees movement.

Physicist Dmitri Chklovskii came to neuroscience ready to search for the brain’s equivalent of Newton’s laws—the basic equations that describe the mechanics of the physical universe. “We don’t have the fundamental principles of how the brain works yet,” he says. “We are starting to get the first glimpse of what they are.”

For the past several years, Chklovskii has led a team of scientists at HHMI’s Janelia Farm Research Campus on the Fly EM project—one of several team projects at Janelia. The project has two aims: to map all nervous system circuits in the fruit fly, using novel approaches to electron microscopy (EM), and to develop theoretical models of the brain to help understand how information is trafficked. “If we know the structure of something, its function is much easier to infer,” he says.

The team has zeroed in on a region of the fly brain that processes vision, known as the optic medulla. Scientists already know the kind of brain cells there, how they fire, and what genes govern their function. The optic medulla was ripe for mapping to learn how the underlying circuits make sense of visual information.

To plot the circuits in the optic medulla, Chklovskii and his colleagues froze a fly brain, sliced it into very thin sections, and stained the sections with chemicals to visualize cell membranes and neural connections under an electron microscope. They took pictures of the part of each section corresponding to the optic medulla. 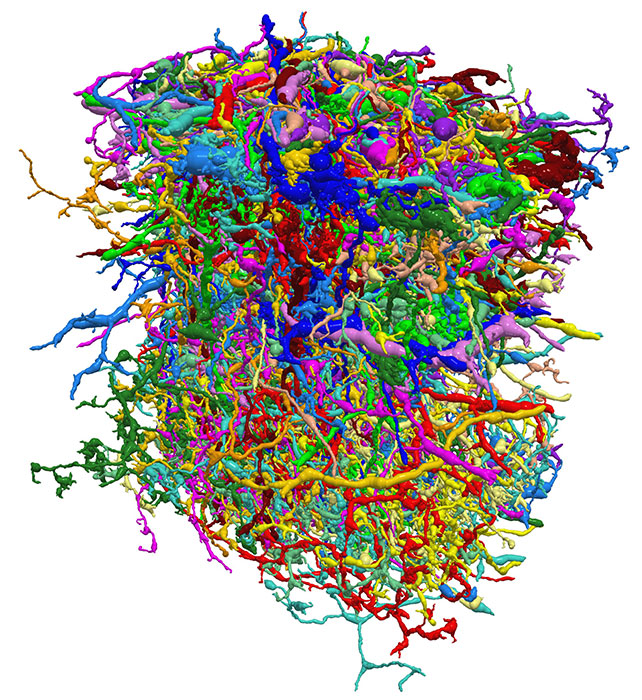 Using these images to build a three-dimensional, or 3-D, map was a monumental task: The team needed to identify cells and structures in each image, and then trace those cells from one image to the next. To accelerate the process, Chklovskii’s and Scheffer’s groups developed computer algorithms that automatically identify cells and trace their paths.

The automated approach sped the mapping effort, but it wasn’t perfect. Sometimes the computer joined two neurons that should have been separate, or split a single neuron into two. About a dozen human “proofreaders” checked for errors and performed other manual steps, devoting more than 14,000 hours—the equivalent of one person working more than seven years, full time.

The team used an existing catalog of distinctly shaped cell types in the optic medulla to classify the neurons in their 3-D map by type, such as Mi1, Tm3, and T4. After identifying each neuron, they pinpointed its many connections, or synapses, by searching for the protein-dense structures that mark those junctions. In total, they mapped 379 cells, which made 8,637 connections.

With the 3-D map in hand, the team set out to learn more about the neural circuitry that detects motion. They relied on findings from Alexander Borst, a regular visitor to Janelia, and his colleagues at the Max Planck Institute of Neurobiology. The German group had demonstrated that T4 and T5 cells were essential in transferring visual information from the medulla to the lobula plate, the area downstream of the medulla in the fly’s optic lobe.

Since Chklovskii and his colleagues had identified T4 cells in their 3-D map, they decided to start with T4 cells and work backwards in the circuit to the medulla. There, the scientists found two other types of neurons, Mi1 and Tm3, which connect to T4 cells.

The team discovered that each T4 cell connects to a cloud of Mi1 cells and a cloud of Tm3 cells. Furthermore, the groupings of Mi1 and Tm3 cells are offset from one another, suggesting that those sets of cells act en masse to spot an object moving across the eye. Based on these findings, Chklovskii predicted that Mi1 and Tm3 cells, in connection with T4 cells, constitute a neural circuit that detects motion.

The group published its results August 8, 2013, in the journal Nature. In the same issue, Borst and his colleagues reported findings that support Chklovskii’s prediction. They measured activity of T4 cells by using fluorescent imaging reagents that respond to calcium levels, which fluctuate during neuronal activity. They found that the T4 and T5 cells exist in four forms—each sensitive to motion in one of the four cardinal directions.

Since completing those studies, the Fly EM group has improved the process substantially. Rather than slicing up the tissue and putting sections in the microscope, they now start with a block of tissue, image the top surface, and then use an ion beam to erode a thin layer. Then they image again and repeat the erosion. This approach, refined by Harald Hess and colleagues at Janelia, captures higher quality images that make mapping from image to image more accurate.

Fly EM can now make maps five times faster than before, and continues to speed up the process about twofold each year, says Scheffer. The human brain has about one million times more neurons than the fly, so it will take 25 years before they can map the human brain efficiently—if they can keep up the pace. But first, Scheffer says, there are plenty of fundamentals to be learned from dissecting fly circuits.