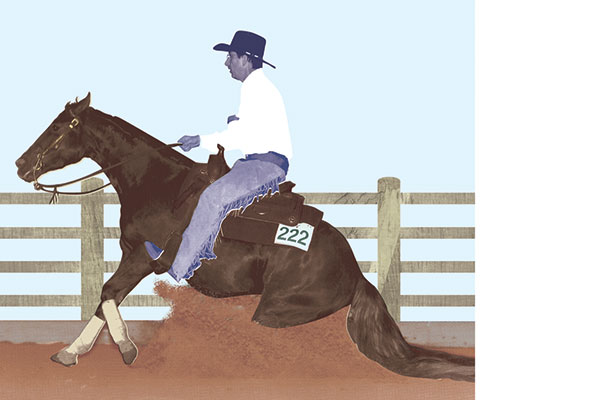 When Michael Welsh’s daughter was taking horseback riding lessons, he asked the instructor if he had any horses good for reining, a style of Western riding that sounded like great fun to the experienced horseman. A few months later, the instructor said he had a horse that Welsh should see.

“I walked into the barn, it was February, and the horse was woolly, gray, and short. I thought, ewww, I’m not gonna like this! Then I got on him and was hooked,” says Welsh, an HHMI investigator who studies cystic fibrosis at the University of Iowa.

Welsh began to compete in reining, where the rider directs the horse through patterns of circles, spins, and stops. The horse should be willingly guided, and controlled speed raises the difficulty level. “A pattern might call for two large fast circles, then a small slow circle, where the horse drops from a full run to a rhythmic da-dum, da-dum, da-dum,” says Welsh. “That’s hard to do because the horse’s adrenaline gets going.”

One of Welsh’s favorites is a sliding stop. Rider and horse circle one end of the arena, accelerate, and then stop, the horse’s back feet sliding through the sand. “It feels like the horse just dropped out from under you, because its back end has gone down toward the ground. Sand sprays up on either side. It’s completely thrilling,” Welsh says.

He stopped competing seven years ago but still keeps a horse on his 80 acres south of Iowa City, for trail rides and to entertain his four grandchildren, ages 3 to 8. They either ride with him or he leads while they ride. “I’m hoping some of them might pick up horseback riding in 4-H,” he says, just as his daughter did.

In recent years, his focus has shifted to 50 acres of rehabilitated tallgrass prairie at the center of his property. The prairie was once farmland that had been pushed too hard, washing away topsoil and exposing clay. “The land reminded me of a scarred old face,” he says. “It became an interesting endeavor, to move it back toward what it had been.”

So Welsh borrowed a tractor, harrow-plowed the land, and used a prairie drill to plant seeds. Once planted, maintaining the prairie has been fairly easy, he says. But it took some time. “The first year all I could see were weeds. I thought, oh, geez, what did I do?” The next year grasses emerged, and a few flowers. Now, “it just keeps going.” Every few years he organizes a burn, for rejuvenation’s sake and to give native plants a competitive advantage. Lab members come to observe or help with shovels and rakes to keep the roaring flames in control.

“It’s relaxing to walk the prairie,” he says. “It’s a good place to walk with someone, unhurried, and talk. The prairie has a quiet beauty that can be appreciated from afar for its color, movement, and expanse and up close for its ecosystems of grasses, flowers, and insects.”