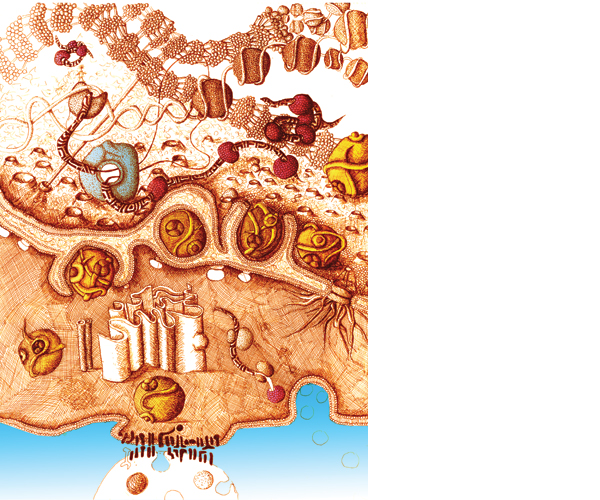 Large RNA–protein particles exit the nucleus by fusing with and
budding through the nuclear envelope.
Illustration by Vivian Budnik / University of Massachusetts
Medical School

Tunneling Out
by Megan Scudellari

Molecules in a cell’s nucleus have only one way out. They must travel through channels, called nuclear pores, which bridge the otherwise impassable double membrane surrounding the nucleus. At least, that’s what scientists thought. Now, a research team including HHMI investigator Melissa Moore at the University of Massachusetts Medical School (UMass) has upended that notion with the discovery of an alternative passageway used by RNA–protein complexes to exit the nucleus.

While studying how motor neurons communicate with muscle cells in fruit flies, UMass geneticist Vivian Budnik noticed something unusual in the cells: a build-up of large, round particles in the space between the two layers of nuclear envelope. A staining procedure showed that the membrane-bound particles did not contain DNA, so Budnik consulted Moore, an RNA expert. They discovered the particles were chock full of messenger RNA destined for the cytoplasmic soup. But how did those large marbles of protein-studded RNA leave the nucleus?

The team saw a tantalizing parallel in virology: herpes virus, which assembles in the nucleus, is also too large to exit via a nuclear pore. Instead, it tunnels through the nuclear envelope, wrapping the envelope’s inner membrane around itself and forming a bubble-like vesicle that fuses with the outer membrane, which allows the virus to escape into the cytoplasm.

“This really made my jaw drop,” says Moore. Though scientists had known about the viral export mechanism for years, no one had ever looked to see whether cells used a similar tunneling mechanism.

The UMass team confirmed that the RNA–protein particles use the same exit strategy as herpes virus and identified other proteins involved that have been linked to human neuromuscular diseases. The findings, published May 11, 2012, in Cell, suggest that disruption of this nuclear export pathway hinders connections between motor neurons and muscle cells. “It’s unbelievable how many previously unexplained things make sense now,” says Moore.

Evidence in the literature indicates this alternative form of nuclear export may occur in organisms ranging from yeast to mammals, says Moore. The team is now investigating these other possibilities.