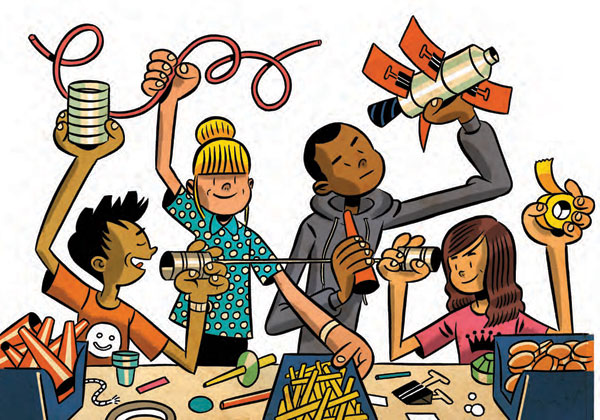 Trash Is Treasure
by Katharine Gammon

On a hot Monday morning in July, a warehouse in Gardena, California, buzzed with activity. The 6,500-square-foot space looked like a child’s fantasy playground with green walls covered in giant spools of thread and floors lined with row after row of blue plastic barrels full of yarn, shiny Mylar, glass, and other sundry items.

Everything in the warehouse was originally destined for a California landfill. But Steve and Kathy Stanton are repurposing all of it for Trash for Teaching, or T4T, an innovative program that reuses industrial cast-off materials to create discovery-based science learning experiences for students.

The Stantons run a local company that makes boxes for commercial candy manufacturers. In 2004, Steve, who was trained as an architect, drove by a huge trash bin full of yellow foam “fingers” behind a paint roller manufacturer. He stopped to help himself to a bag of foam. The business owner, who couldn’t understand why Stanton wanted the trash, was not pleased. Today, after eight years of successful programs in area schools, Stanton gets a different reaction—close to 100 businesses donate their weird and wonderful trash to support T4T, anywhere from monthly to once per year.

T4T originally focused on arts but turned its rubbish-repurposing energy to science in 2011. The organization is working with 150 California schools to create science-based afterschool programs fed by rolling carts stuffed with supplies. The group also helps schools integrate discovery-based learning programs into STEM (science, technology, engineering, and math) classes from elementary to high school. T4T is part of a larger movement to return discovery to classrooms.

"From our work so far, it seems to be much more important to provide students with challenging experiences so they can strengthen their own critical thinking skills and their notions of tenacity instead of just learning particular content."

Steve Stanton says they try to move 1,000 pounds of materials out of the warehouse every month, all aimed at encouraging students to think creatively and critically. For example, one open-ended challenge asks kids to design the ultimate recycling machine, able to transport a can into a blue bin 15 feet away. According to Shiva Mandell, T4T’s director of creative programming, hands-on learning and experimentation often create an excitement for science that the participants didn’t know they had.

“Collaboration and trial-and-error testing are more important than the underlying specific science concepts, so it doesn’t look or feel anything like traditional textbook learning,” he says. “From our work so far, it seems to be much more important to provide students with challenging experiences so they can strengthen their own critical thinking skills and their notions of tenacity instead of just learning particular content.”

Hands-on learning can be one of the first things to be axed in cash-strapped school districts, leaving students in the dark about the scientific process. James Maloney, who runs the Caltech Classroom Connection, one of several HHMI-funded programs that use T4T’s preassembled science kits in Pasadena schools, says that students often struggle to imagine what scientists actually do. “They’re curious, but they don’t know what real science looks like and what the scientific process is actually like.”

He says that T4T’s kits give kids the opportunity to ask a question and then do a controlled investigation to try to find the answer. One kit, for example, has students investigate reflection, refraction, and other properties of light using metallic film, wax paper, a Petri dish, and a pen clip. “Alongside that,” says Maloney, “there is an environmental message about using waste-stream materials that would otherwise end up in the garbage.”

Each material has a story, and as Steve and Kathy walk around the warehouse, they share a bit about each one. The donated Petri dishes are new but past their expiration date (yes, medical-grade plastic has a date of expiry); they’re unusable for hospitals but fine for classroom work. The eyeglasses are from club membership optometry shops—T4T receives around 100 pounds per week. Clothing manufacturers donate the yarn, Mylar, and string. Slot-machine parts come from nearby Los Angeles—in fact, Kathy estimates that 99 percent of the materials come from businesses within 25 miles of their warehouse. And, since 2004, the program has also diverted more than 50,000 pounds of waste from landfills.

Pallets of materials are piled behind a vast floor-to-ceiling denim curtain that Mandell and his wife spent their honeymoon sewing. T4T is a labor of love for the handful of people who devote their time to the effort. Creating and tweaking the discovery concepts can take months, says Mandell. By using recycled supplies, though, the kits can be assembled much more cheaply than if the organizers had to purchase the materials.

T4T is continually developing more ways to use the materials in classrooms and afterschool programs. One kit asks high school students to create a tin can-style telephone out of medical specimen cups (the kind used to collect urine samples) and string. Dave Zobel, a science writer who helped create the lesson plans, says that he is always surprised by the unexpected ways the students use the materials to invent phones. For example, one group of teens used pieces of laser-cut Styrofoam as the phone and found that the material carries sound even better than plastic.

Getting students excited about science and technology is the first step to filling the high-tech jobs of the future, says Steve Stanton. In California alone, STEM-related jobs will number nearly 1.2 million by 2018, and Stanton says the school system is not doing its job if kids are not prepared to excel in that job market. He hopes that putting together supplies from a dream-like warehouse may help ignite a spark in students—from Styrofoam telephones to the next great innovations to improve the world.