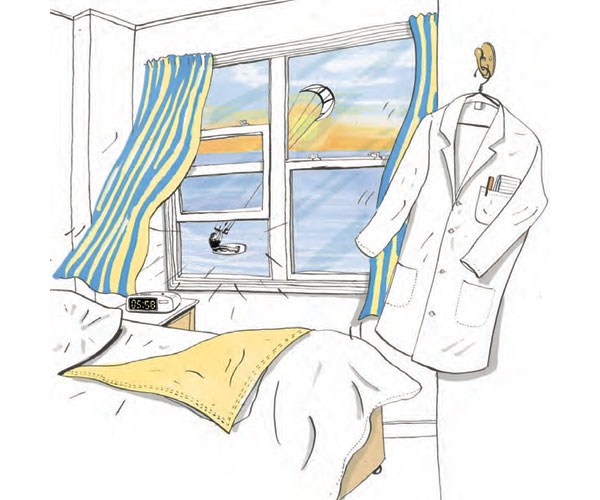 Tethered to the Wind
by Cathy Shufro

Because the night was windy, biologist Craig Mello had set his alarm for 5:00 a.m. He woke, put on a wetsuit, and crossed his Rhode Island backyard to the sandy shore of Narragansett Bay. The September morning was still dark when he sped away from the beach, his feet on a surfboard, his body tethered to a crescent-shaped kite above him. He zipped across the water at 20 miles per hour, propelled by the wind.

By 8:45 a.m., Mello was back on terra firma, meeting with scientists up the road at Brown University.

“Kiteboarding with the moon trail on the water is just beautiful,” says Mello, an HHMI investigator at the University of Massachusetts Medical School, an hour’s drive to the north of his home. From early spring until late fall, Mello kiteboards whenever the wind is right, often at dawn or moonrise. “With the sun you get a golden path. With the moon you get a silver path.”

It’s a high-intensity pursuit that reconnects Mello to the bay he explored by sailboat as a teenager during summer visits to his grandparents. The first time he steered a Sunfish, he recalls, “I got totally hooked.” In sailing, Mello found a doorway to “just being—being out there and experiencing nature, being in the moment and not trying to accomplish anything.” He felt the same when he later learned to windsurf.

Kiteboarding, he’s found, amplifies his communion with sea and sky. “When you are sailing, you’re controlling the boat. When you’re windsurfing, you’re holding up the mast like a sidestay—you’re part of the boat. And when you are kiteboarding, your body is the connection between the kite, which is floating in the sky, and the board floating in the water. You are like the fulcrum,” says Mello. “You are the connecting point.” It took him a whole summer to get upright on the board, but according to the six-foot-three, 52-year-old Mello, “It’s pretty effortless once you know what you’re doing.”

Just as some people obsessively check their phones for email, Mello checks his to track the wind speed and direction at Conimicut Lighthouse, across Narragansett Bay from his living room window. He needs to know if the wind is right for the mile-long tack toward the green islands on the horizon.

Oddly, Mello might not have tried kiteboarding if he hadn’t won the Nobel Prize—the 2006 prize for physiology or medicine that he shared with Andrew Fire for their discovery of a type of gene silencing called RNA interference. When an old windsurfing buddy wrote with congratulations, he mentioned that he hoped Mello had tried kiteboarding. He had not. The friend met Mello on the beach to show him the ropes.

His zeal for the sport parallels his motivation to do research. “I am basically the same way about the lab as I am about kiteboarding,” says Mello. “I love it.”

Managing the demands of kiteboarding is similar to repeating a mantra, says Mello’s wife, yoga instructor Edit Mello. “His mind is able to be so busy that it’s actually restful for him.”

Even when he’s far from the water, Mello says, “It’s like the kite is always flying there in your mind. It’s a refuge you can go to without going anywhere.”