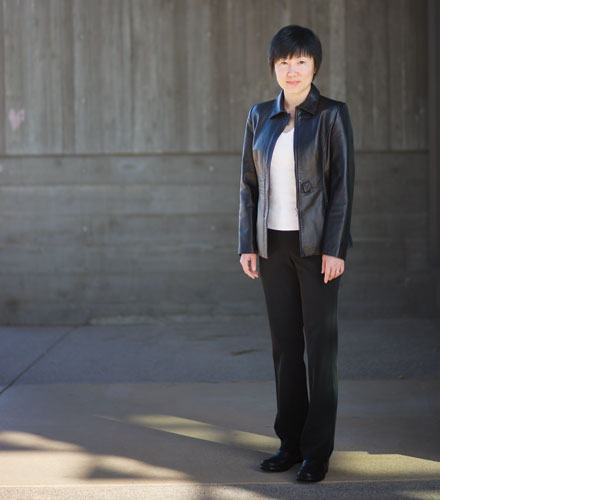 Peering inside an intact brain shows that related neurons work together.

During one of her regular visits to the Institute of Neuroscience in Shanghai, China, Yang Dan had an Ah-ha! moment. As she listened to a science seminar, the HHMI investigator at the University of California, Berkeley, realized that she could test, once and for all, a key hypothesis of how mammalian brains are organized. “Right after the seminar, I went to talk to Song-Hai Shi, the speaker,” she says.

Shi, from Memorial Sloan Kettering Cancer Center in New York, had just told the audience that neurons in the developing cortex that come from the same parent cell—called sister neurons—are more likely to be connected than two neighboring non-sister neurons. “I immediately wondered if the sister neurons had similar functions,” Dan says, her voice still rising with excitement about that 2010 conversation.

Whereas Shi’s team had been working with slices of fresh brain tissue from a rodent, Dan’s question required studies in live animals. She wanted to peer inside the brain of a mouse and see if individual pairs of sister neurons are functionally connected, meaning they respond to the same stimuli. As a systems neuroscientist, Dan pairs natural context—in this case, intact brains—with computer programs, computational tools, and statistics to tease apart neural responses in live animals.

To examine pairs of sister neurons, Dan’s team injected a small amount of a viral vector encoding a fluorescent protein into the developing brain of mice. With such a low concentration of the virus, only a limited number of the neural progenitor cells were infected. As those cells divided, the daughter cell neurons inherited the gene encoding the fluorescent protein. Whereas Shi’s team used the labeling approach to study sister pairs in slices removed from the animal, Dan’s team used two-photon microscopes to study the neurons in the intact brain. They saw that the sister neurons, identified by their fluorescent label, were more likely than randomly selected neighboring neurons to respond to similar stimuli. As predicted, the sister neurons not only shared a parent cell but were functionally related as well.

"If I had missed that seminar, we would not have thought about the sister-neuron project at all."

Of course, seeing that the sisters share a function is very different from understanding how that happens. One hypothesis is that the sister cells remain physically connected via a shared radial glial cell, which guides their movement during development. To find out whether each neuron retains some physical linkage to other sister cells from the same parent cell, the team injected a drug (or in separate experiments, a mutant protein) to disrupt gap junctions, which are channels that connect the cytoplasm of one cell to another. Without the gap junctions, the sister neurons no longer shared a function, showing that the functional relationship depends on a physical one.

“It was a pretty simple idea, but important,” Dan says about the work, published June 7, 2012, in Nature. The experiments support a long-standing model of how the mammalian cortex is organized, she explains. In the 1950s, scientists discovered that the neurons in the cortex are organized in columns, somewhat like the ribs of a fan, with each column responding to a particular type of stimulus. When Pasko Rakic at Yale University found that sister neurons also line up in columns that parallel the functional columns, he proposed that the developmentally related columns form the basis of the functional ones and dubbed it “the radial unit hypothesis.”

The work from Dan’s team, done in collaboration with Shi’s group in New York, is the first hard evidence supporting that model. “There were some hints, but this was proof in the intact system,” Dan says. “Columnar organization really talks about the function, and that is something you can look at only in live animals.”

Dan continues to explore how neurons work together in the mammalian brain. Her team recently turned its sights on inhibitory neurons, which modulate how other neurons respond to a stimulus. They reported in the August 16, 2012, issue of Nature that of three molecularly identifiable types of inhibitory neurons in the visual cortex, one type helps fine-tune the range of stimuli that its partner neurons respond to.

When Dan thinks about Shi’s seminar now, she pauses and her voice drops just a bit. “It was a pretty fateful moment. If I had missed that seminar, we would not have thought about the sister-neuron project at all. It really opened up a big line of research for us.”