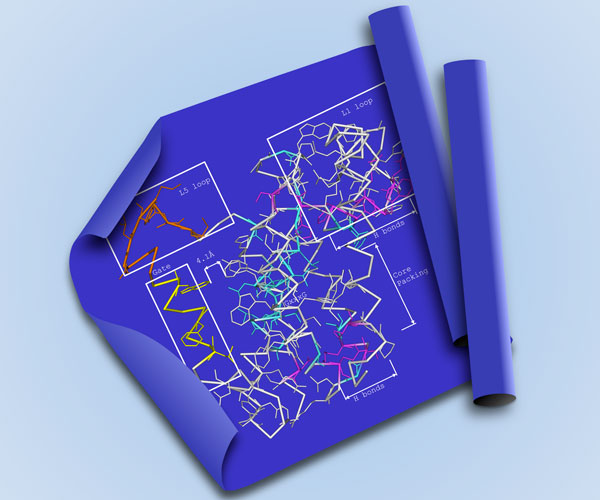 The blueprint for rhomboid protease reveals the enzyme is unstable because it is held together
mostly by weak bonds.
illustration by Rosanna Baker and Sinisa Urban

Rickety for a Reason
by Olga Kuchment

Researchers investigate a fragile but powerful enzyme in the cell membrane.

Imagine walking inside a building so flimsy that it shakes with every step, making you wonder what keeps it standing. HHMI early career scientist Sin Urban has been asking the same question about an unusual class of enzymes, the rhomboid proteases.

These enzymes exist in the cell membranes of most living things, performing essential biological jobs. They let cells converse with each other, allow fruit fly embryos to develop normally, and lend a hand to malaria parasites as they invade red blood cells. Unfortunately, much about how rhomboid proteases work is mysterious, in part because they look so different from other enzymes.

Urban made a step toward solving this mystery by mutating a rhomboid bit by bit. He learned that the enzyme is unstable because it is held together mostly by weak bonds; he also uncovered a surprising way rhomboid ensnares the water it needs to function.

The first clue about the chemical role of rhomboid proteases came in 2001, when Urban, at the University of Cambridge, discovered that they catalyze the same chemical reaction as a well-understood class of enzymes, the serine proteases. Five years later, Urban and other researchers solved the three-dimensional structure of a rhomboid. But exactly how rhomboid proteases work remained unclear because they don’t resemble serine proteases in shape or amino acid sequence. What’s more, their job—cutting proteins in select places—requires water, which is scarce in the cell membrane where rhomboid proteases are found. 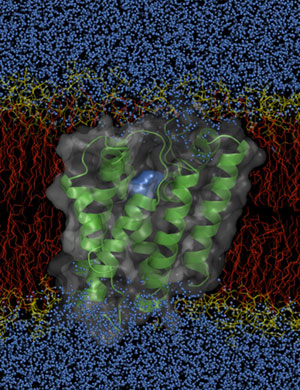 On top of that, rhomboid proteases are almost impossible to study outside the cell membrane; they break apart if their surroundings go awry. So Urban, now at Johns Hopkins University, and research associate Rosanna P. Baker decided to mimic the cell membrane in the lab and then remove, one at a time, each component of a rhomboid that might be keeping the enzyme’s structure intact. Using protein purified from bacteria, they changed a rhomboid’s amino acid sequence in different ways to create 151 variants, or mutants. By studying how stable each mutant was, the researchers pinpointed the amino acids most important to maintaining the enzyme’s framework.

“We essentially took an Uzi machine gun and poked holes in every side of this molecule,” Urban says. “We think it allowed us to get an unbiased yet quantitative view of the entire architecture.”

They tested each mutant’s stability with an innovative technique called differential static light scattering. In their experiment, an instrument gradually heated up many rows of enzyme samples at the same time. The rising temperature caused various mutants to break apart at different rates—less stable enzymes unraveled at lower temperatures. The unfolded enzymes scattered light, which a camera detected. The team determined the “breaking points” of the 151 variants and combined the results to create a picture, like an architect’s drawing, of the bonds that support a rhomboid’s three-dimensional structure.

The results, published September 2012 in Nature Chemical Biology, helped answer some of the persistent questions about rhomboid structure.

The drawing revealed why the enzyme is so rickety. Holding the structure together are four close-knit groups of amino acids—four “keystones”—plus a large number of weak connections. As a result, rhomboids sway like a shack held together mostly by loose nails. “The enzyme is so unstable that almost any mutation has an effect,” Urban says. But he believes the enzymes’ unstable nature allows them to respond to changes in their environment. For example, the enzymes may be able to partly break open, allowing the active site to grab onto pieces of proteins that vary in shape and size.

The mutants also held several surprises, which eventually helped the team understand how proteins and water reach a rhomboid’s active site. When the researchers perturbed the amino acids in a certain area of the enzyme, the resulting mutants were just as fragile as the original enzyme but were 15 times more active. These results suggest that this part of the enzyme is the gate to the active site. With their mutations, the team had essentially broken the lock on the gate, letting bits of proteins sneak inside the active site.

Another set of mutants were no more wobbly than the original, but they were much less powerful. Urban and research associate Syed Moin collaborated with Yingkai Zhang’s lab group at New York University to study how the normal rhomboid employs the amino acids that were swapped out in these mutants. Using biochemistry experiments and computer simulations, the team showed that at least two mutations help the enzyme retain water. The researchers reported their findings July 3, 2012, in Structure.

A nagging question had been how a rhomboid gets hold of the water it needs to function inside the water-repellent cell membrane. Researchers had proposed that water funnels in from outside the cell. Now it seems that the enzyme also keeps a few water molecules in store, Urban says. “When water is needed for catalysis, there’s always some in the cup.”

Urban plans to investigate several other puzzling mutants. Perhaps the work will help design a drug that will stabilize the shack, or bring down it for good in pathogens that cause malaria and other diseases.