A Nobelist shares the secretes to his longevity in the lab.

Trained as a cardiologist, Robert Lefkowitz is the first to admit that his 39-year research career has been driven by more than a desire to treat coronary disease. He has always had an unshakeable urge to figure things out. Yet his work on a large class of signaling molecules known as G-protein-coupled receptors, which earned him the 2012 Nobel Prize in Chemistry, has led to drugs for conditions ranging from allergies to schizophrenia to yes, even coronary disease.

The receptors relay signals from hormones and other molecules to the cell’s interior, allowing the cell to respond to changes in the body such as a surge in adrenaline. When Lefkowitz picked up the trail of these receptors in the 1970s, many scientists were unconvinced they even existed. With a growing army of trainees, Lefkowitz showed they did. He eventually isolated three subtypes of what is now known to be the largest and most pervasive family of receptors—there are 1,000 or more in all—and cloned nine receptors in that family. G-protein-coupled receptors play a role in virtually all known physiological processes.

What was it like to get that early morning call from Stockholm?

Well, you hear rumors. For years I’d heard that I was in the running, but the talk was always about the prize in Medicine. That award came and went, so on the morning in question it was the last thing on my mind. But they don’t keep you in suspense. You hear a Swedish voice saying they’re calling with some good news. They’re not calling about the weather in Durham!

There was never a moment when my heart rate jumped, but there was this wonderful feeling of satisfaction and delight. I could see my wife’s eyes opening like saucers, and she was tearing up. It was one of those moments you’ll never forget. There were about 45 minutes between the call and the first news conference. You know it’s happened, nobody else in the world knows about it, and a storm is about to descend. It was surreal and wonderful, sitting there with my wife, drinking coffee, just trying to get our minds around the whole thing. I still haven’t done that.

How did you react to hearing that your former student Brian Kobilka would share the prize?

I experienced it as being perfect; I cannot tell you how thrilled and proud I am. My 40-year career and his 30-year career tell one smooth, continuous story. Brian left my lab around 1989, and we kept in reasonable touch, as I do with many of my trainees. We talked at intervals about all manner of things, mostly scientific, but two or three years ago we started collaborating again. On October 8, Brian and I Skyped for an hour and a half about a paper we are writing together. Thirty-six hours later we win the Nobel Prize. Back together again, in more ways than one.

You’ve been an HHMI investigator for 36 years. How has HHMI support affected your work?

Challenging things take time. That’s the definition of challenging. One of the nice things about being a Hughes investigator is it allows you to take a bigger risk because you don’t have to have an immediate result.

At the time that I was entering the field, nobody was trying to study receptors directly. My vision was, boy this could be big. If there was really a way to get at these mythical receptors, it could be something I could build a whole career on. I realized that if we were going to move forward we would need to develop all kinds of techniques to study receptors—we needed to label them, bind things to them, purify them. 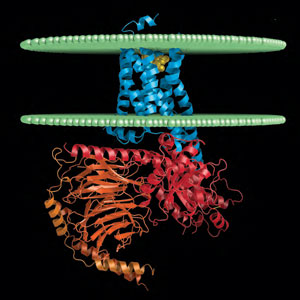 The risk, in retrospect, was huge. I wasn’t even 30 years old, but I had the chutzpah of youth. It seemed very challenging, but I didn’t perceive the risk. It never occurred to me that the whole thing could fail, even though I went down a number of blind alleys. Hughes support allowed me to keep going.

You clearly did a good job mentoring Brian Kobilka. What, to you, makes a good mentor in science?

There’s no single right way to mentor. I love interacting with my trainees, getting to know them, and assessing what makes them tick. What I do is a lot like coaching—you play to people’s strengths. Let’s say I’ve got a guy who’s five-foot-seven and a terrific shooter. I don’t make him a center. And I don’t make my seven-foot-tall player a point guard. My goal for every trainee—and I’ve had more than 200 of them—is the same. I want them to experience what it’s like to work at their potential, to be running as fast as they can run. For some people, like Kobilka, that’s a four-minute mile. For others it’s an 11-minute mile.

If my career was limited to just the experimental results I’ve reached with my own hands, nobody would’ve heard of me. Going from an idea to the right experiment is not a trivial thing. It requires great players and good coaching.

Your lab still produces a slew of research papers. How do you maintain enthusiasm for the work after so many years?

A lot of being successful is leveraging your gifts to the maximum extent possible and protecting yourself from inevitable failures. Gifts cannot be explained or fundamentally changed—though you can tinker around the edges.

For example, throughout my life I was a long-distance jogger. I’m totally devoid of athletic talent, but with hard training I could get to seven minutes a mile. I have a friend, Alton Steiner, who was once a champion swimmer and runner, a real athlete. Then he had some back problems, and he didn’t run a speck for two years. One day he called me up, and I mentioned that I was running a 15K race the next day. He decided to join me. It was a miserable, humid day. The first mile we do at about a seven-and-a-half-minute pace. In the second mile I slow down a bit, and by the third mile I’m down to 8:30. He looks fine. Eventually he looks over sheepishly and says, “Do you mind if I go up ahead?”

I finished the race, but it was not pretty. And he’s there sipping a lemonade, having finished at an average pace better than my fastest pace. You can tinker around the edges. But at my best, I can’t eat his dust. That’s what a gift is. After all these years, I haven’t a clue how I still have this exuberance for science. I guess it’s a gift.

What’s the next frontier for your lab?

Lately we’ve been focused on beta arrestins, a class of molecules we discovered about 20 years ago that we still don’t fully understand. They interact with receptors when they’re stimulated, thereby turning off signaling, hence the name. But in the last few years we’ve discovered that beta arrestins can act as signaling molecules in their own right. That suggested the possibility of developing a new class of therapeutic that stimulates the biological pathways with desirable results and arrests the pathways with less desirable results. 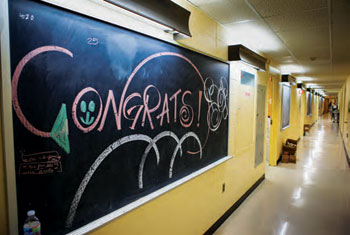 Still, my job is to look at the big picture. Every experiment’s results suggest five different things you could do next. They’re all interesting. That’s the problem. But we want to go from here to there, and my job is to keep us on the trail.

I often tell people there are four keys to success in science. The first is focus, the second is focus, the third is focus, and you can figure out the fourth. If anybody learned that lesson from me it was Brian Kobilka. After he left my lab, he became obsessed with getting a crystal structure of the receptor. It took him about 15 years. In 2007, he solved the structure of the beta-adrenergic receptor [the G-protein-coupled receptor that responds to adrenaline] and later the structure of the receptor interacting with its G protein. That’s a remarkable accomplishment.

One of the things I learned by running races is you don’t look up. You don’t look ahead. You look down. You put one foot in front of the other, and you just look at the road in front of you. You don’t worry about what’s out there. Before you know it, you get to the end.