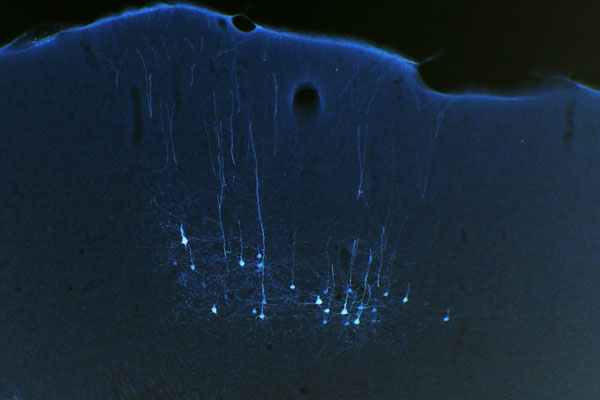 An unexpected brain connection reveals that mice can learn new features of their songs.

Many a man believes the way to a woman’s heart is by wooing her with a song. Apparently, mice think so too. New research by HHMI investigator Erich Jarvis shows that a mouse can alter the pitch and sequence of its ultrasonic serenade to match those of its rivals, which may increase its chances of winning the affection of nearby females.

In addition to the squeaks we would recognize, a male mouse can belt out tunes too high-pitched for humans to hear. But by recording the sounds and lowering their pitch on playback, we can also appreciate the melodies. These songs, thought to be part of courtship, have long been considered innate rather than learned. However, researchers noticed that the vocalizations sound similar to those of songbirds, which can modify melodies on the basis of what they hear. “That led me to question whether or not mice have any type of vocal learning behavior,” says Jarvis.

Vocal learners such as humans and songbirds have a strong direct connection between their motor cortex, which manages fine motor control, and the part of their brainstem that tells the larynx how to move. Jarvis and his graduate student Gustavo Arriaga discovered that mice do too. “It’s not exactly what we see in humans,” says Jarvis, whose lab is at Duke University Medical Center. “In mice there are a few connections, but in songbirds and humans there are a lot.”

The researchers also found that when two male mice are placed in a cage with a female, the smaller, presumably less dominant, male shifts the pitch of his song to match that of the other male. Their findings, published October 10, 2012, in PLoS ONE, contradict a long-held assumption that mice are not vocal learners.

“We think that mice are vocal learners but to a limited degree,” says Jarvis. “This is not an all-or-none type of behavior. We propose it is a continuous spectrum of traits.” Mice fall somewhere in the middle. Next, Jarvis plans to figure out whether other animals, such as nonhuman primates, have overlooked learned vocalizations.