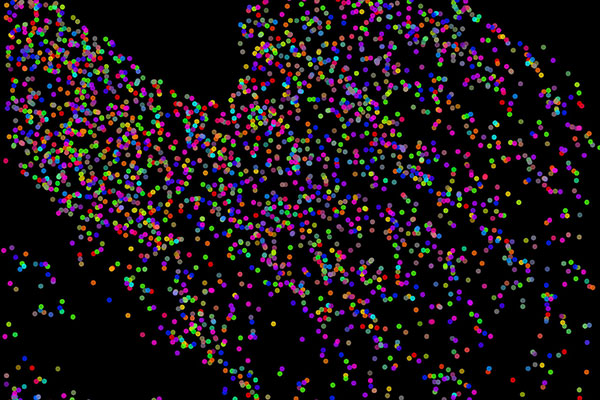 Each spot in this cell corresponds to an RNA molecule, colored according to its binary code.
Image courtesy of the Zhuang Lab.

Every human body contains several trillion cells, yet each cell contains an identical DNA sequence. A good way to distinguish one cell from another is by looking at the RNAs they express – something biologists do all the time.

The problem is there are thousands of different RNA species forming a cell’s transcriptome. Even with the most advanced imaging methods in biology, scientists can look at only a couple of dozen at a time. And when they focus on just a few RNA species, they’re missing out on a wealth of information.

Xiaowei Zhuang, an HHMI investigator at Harvard University, has developed a technique that’s allowed her team to image some 1,000 RNA species at once, and that could potentially be further extended to study the entire transcriptome simultaneously.

To do this, Zhuang built on an existing technique called single molecule fluorescence in situ hybridization (smFISH). In smFISH, scientists attach a fluorescent probe to specific RNA strands so they can be seen as tiny dots under a microscope. It’s a powerful approach with little initial error, but it’s limited by the number of RNAs it can target at a time. Though FISH probes can theoretically be made to uniquely distinguish all kinds of RNA molecules in a cell, there hasn’t been an imaging technique that lets scientists take advantage of that capacity.

Until now. A new technique – which Zhuang has dubbed multiplexed error-robust FISH, or MERFISH – does just that. This strategic approach uses sequential imaging of defined combinations of RNAs and error-robust encoding schemes to detect many different RNA species simultaneously. In one implementation of MERFISH, for instance, Zhuang’s team assigns each RNA molecule a binary code, a sequence of 1s and 0s, so it can be uniquely identified. Then, instead of going through just one round of imaging RNAs, MERFISH goes through multiple rounds, labeling different combinations of RNA each time. In each round, some RNAs are tagged with fluorescent probes and some aren’t. “At the end of the day, what you get is a bunch of dots,” says Zhuang, “and each dot has appeared in different subsets of imaging rounds.” Every time a fluorescent dot shows up, the RNA in that position gets assigned a 1. Every time the space is dark, the RNA gets a 0. Thus, a string of numbers is attached to each RNA – a string complex enough to tackle a thousand RNA species at a time. A key to the success of the MERFISH method is the use of error-robust encoding schemes. In this case, for example, where simple binary codes are used, every single error (misread a 1 as a 0 or vice versa) could lead to misidentification of an RNA, and since each RNA is identified by a string of 1s and 0s, the error adds up and becomes prohibitive. The trick is to encode the RNAs in such a way that each differs from the others by multiple errors, thus substantially reducing the probability of misidentification. The team published their method in the April 24, 2015 issue of Science.

“We don’t want to stop at a thousand RNA species, though,” says Zhuang. “We want to detect several thousand, or tens of thousands.” Theoretically, MERFISH would allow scientists to do that, and Zhuang says her team has more tricks up their sleeves to substantially increase this number. But already, MERFISH is a big advance, giving scientists the ability to look at many RNA species simultaneously in intact tissues, rather than in isolated cells, with important spatial information. It’s allowing them to ask larger questions about cellular development and disease, and to distinguish between cells on a whole new scale.