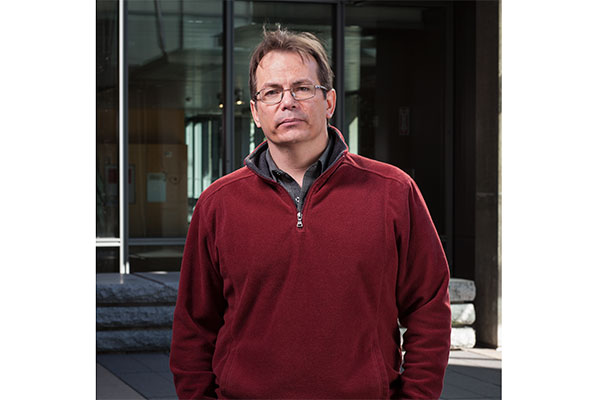 Using a fresh approach, researchers are making progress in unraveling the genetic complexities of the disorder.

Autism is notorious for the broad range and variable intensity of symptoms that can impair a child’s behavior, communication, and social interactions. Scientists have long known that developmental disability is strongly influenced by genetics, but pinpointing a cause for autism’s onset has proven frustrating. Even identical twins can have vastly different forms of the condition.

A promising “genotype-first” strategy pioneered by HHMI Investigator Evan Eichler of the University of Washington is now giving the search for answers a much-needed boost. Instead of beginning with a detailed characterization of an individual’s symptoms and then hunting for the responsible gene or mutation, Eichler sequences large amounts of DNA from multiple patients and then seeks out shared genetic variants that may point toward common paths to the disorder.

The approach has yielded a growing list of autism subtypes in which children with the same mutation have a highly similar suite of symptoms. “I feel like we’re kind of where cancer was as a field 20 years ago,” Eichler says. Cancer, once widely considered a single disease, has since become an umbrella of more than 200 types, each with its own genetic and environmental determinants. “I like to think that this is what we’re doing in the case of autism: we’re helping to unravel this complexity. But we’re doing it with genetics first,” he says.

A decade ago, autism researchers began finding genetic clues in often sporadic mutations known as copy number variations, or CNVs, in which big chunks of chromosomal DNA are missing or duplicated. Eichler and his collaborators discovered that some of these CNVs occurred almost exclusively in children with autism or developmental delays.

Soon thereafter, a series of technological breakthroughs began allowing “next-generation” DNA sequencing methods to more quickly and cheaply spell out the genetic code of autism patients. With the new tools, Eichler and colleagues began sequencing the exome – the 1.5 percent of the genome that encodes proteins – of affected individuals and their parents. This time, the researchers focused on single base-pair mutations and small insertions or deletions to zero in on specific genes. Even with only 20 families in that study, “we were thrilled with the candidate genes that we were seeing,” Eichler says. “There was already handwriting on the wall that this was going to be productive.”

When he and other researchers applied the same strategy to a much larger collection of DNA from patients, parents, and unaffected siblings, they found more evidence for an excess of “gene-killing” mutations in autism patients. After pooling their results, however, the lab teams found that the vast majority of mutations mapped to separate genes. “Just as there are many roads to Rome, there are many ways to get to an autistic state,” Eichler explains. Despite the excitement of seeing a strong genetic signal, the researchers realized they would need many more DNA samples to prove the involvement of any single gene.

To scale up the effort, Eichler organized a large data-sharing consortium of labs, and a December 2012 paper in Science targeting 44 candidate genes demonstrated the group’s newfound power. By sequencing the genes in nearly 2,500 individuals with autism spectrum disorders, the consortium found disruptive mutations in six genes that accounted for an estimated 1 percent of all sporadic cases.

As the sequencing effort accelerated, distinct genetic subtypes of autism began to emerge. Tellingly, individuals with the same disrupted gene tended to share similar physical, clinical, and behavioral traits. Based on early evidence implicating a gene called CHD8, for example, Eichler and colleagues sequenced the gene again in 3,700 individuals with autism or developmental delay. As they reported in a July 2014 Cell study, their analysis yielded 15 independent mutations – and the tally has since surpassed 20.

By having the children re-evaluated by pediatricians, psychiatrists, and other clinicians, the researchers discovered that although only half of the individuals are intellectually disabled, most have autism and macrocephaly, or overly large heads. Most also have experienced severe gastrointestinal problems, and Eichler suspects that the same genetic subtype might contribute to a sleep dysfunction that keeps the children awake for several days at a time. In zebrafish, his lab found that knocking out the equivalent gene resulted in fish with somewhat larger heads and impaired digestion.

Among eight children with a sporadic mutation in a separate gene called DYRK1A, by contrast, Eichler’s lab and collaborators in Australia and Europe found that all have autism, intellectual disabilities, and unusually small heads, or microcephaly. As described in a February 2015 Molecular Psychiatry study, many also have pointed chins resulting from a skull deformity that often requires surgery to remove overcrowded teeth. In fruit flies, researchers discovered the same gene mutation 20 years ago and named it “minibrain”; DYRK1A is also one of two genes linked to cognitive deficits in Down syndrome.

Eichler and colleagues are now screening thousands of families for mutations in 250 candidate genes associated with a half-dozen protein networks tentatively linked to autism. When clinicians eventually develop potential interventions for the disorder, he says, knowing which network is impaired in which patient may help determine the right course of therapy.

In the interim, he notes, a genetic diagnosis may help parents understand the basis of autism, connect with other families for support, and realize that they’re not to blame for their child’s condition. “I think it adds a certain human aspect to all of this research,” Eichler says. “After years of being in this business, I find this part to be sometimes better than the Nature and Science papers: the fact that for these individual genes, we’re really making an impact on families’ lives in what feels like very substantial ways.”