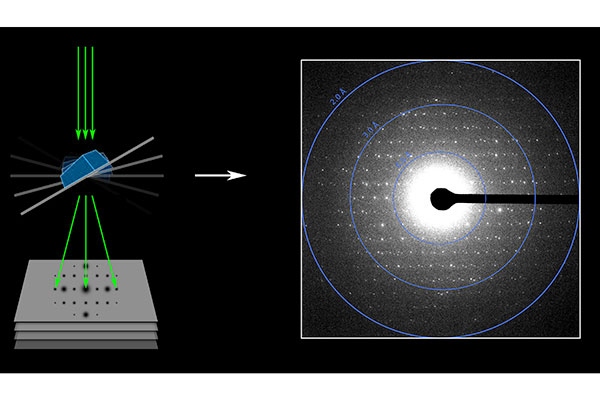 illustration courtesy of the Gonen lab

Tamir Gonen had a problem. He wanted to produce big, resilient crystals from the membrane proteins he was studying. The crystals would allow him to use x-ray crystallography to see the proteins’ three-dimensional structures and learn how they form pores in cell membranes. But the proteins weren’t cooperating. He could only coax them to form tiny crystals.

So Gonen decided to make use of what he had. He devised a technique with the potential to help the structural biology community by radically increasing the number of proteins whose structures can be solved.

For the past 30 years, x-ray crystallography has been the go-to method for figuring out a biological protein’s three-dimensional shape. The process is fairly straightforward: Grow a protein crystal, shoot it with an x-ray beam, and collect data on how the x-rays are diffracted by the crystal. Analyze the data using a computer, and out pops a structure. Surprisingly, the first—and least technical—step in this process is often the hardest. Only about one-third of all complex biological molecules can form crystals, and only a tiny fraction of those are large enough for x-ray crystallography.

“These days, most of the easy proteins—the ones that readily form large crystals—have been solved,” says Gonen, a group leader at HHMI’s Janelia Farm Research Campus. What are left are the difficult ones. “If [scientists are] really, really lucky, they can still get some crystals, but they’re very, very small,” he says. And unfortunately, these microcrystals are useless for x-ray crystallography. The intense x-ray beams destroy them before meaningful data can be collected from the proteins.

Gonen conceived of a new method as an HHMI early career scientist at the University of Washington, where he was working with cryo-electron microscopy. Because electrons interact with atoms more strongly than with x-rays, Gonen thought an electron microscope might be able to get data from small crystals.

“X-rays are pretty lousy at interacting with matter,” explains Gonen. “Electrons are about a thousand times better, and that means you should be able to get meaningful data from very small crystals.”

Gonen had to wait a few years to see if his idea worked. “I’d been thinking about this for a long time, but only after coming to Janelia did I have the time, as well as the right people and the right equipment, to try things out,” he says.

At Janelia, Dan Shi, a microscopist in Gonen’s lab, started working on the technique. He was joined by postdoctoral fellow Brent Nannenga, an engineer who wanted a challenge. The third team member, Matt Iadanza, joined the effort by happenstance, or what Gonen likes to refer to as “the magic of Janelia.” In Gonen’s lab, the desks are all together in one room. One day, Nannenga was lamenting that the commercial software he was using couldn’t handle the electron diffraction data. Iadanza, a desk away, couldn’t help but overhear. “It turns out that Matt’s hobby is writing programs,” says Gonen. “He said, ‘If you guys work out the math, I will try to code it.’ And out came this program that allowed us to solve the structure.”

The scientists christened the technique “MicroED” and published their results November 19, 2013, in the journal eLife. The “Micro” refers to the submicron size of the crystals; “ED” is short for electron diffraction.

The equipment for MicroED is exactly the same as that used for cryo-electron microscopy, making it very accessible to structural biologists. And the fact that MicroED uses crystals one million times smaller than those needed for typical x-ray crystallography means that the structure of many hard-to-crystallize proteins may now be attainable.

That is, once the technique is ready for prime time. For one thing, Gonen’s team has used MicroED only with lysozyme, a widely used test protein known for its ease of handling and great diffraction; it has yet to work on other proteins. To help the technique go mainstream, Gonen’s group also needs to optimize data collection to capture as much diffraction information as possible. And, there needs to be an easy way to process the resulting data—the program Iadanza wrote was customized for lysozyme.

Richard Henderson, an electron microscopist at the MRC Laboratory of Molecular Biology in Cambridge, UK, agrees that the technique could have broad applicability for other protein crystals. However, he adds, “Before the value of MicroED can be fully evaluated, Gonen and his colleagues will need to make some technical improvements,” including the use of an energy filter to remove extraneous scattered electrons, better software, and a more efficient electron detector.

Gonen’s team is working out all these kinks. They’re trying the technique on other protein crystals and collaborating with several groups to tweak existing x-ray crystallographic software to process MicroED data.

“I think that once these challenges are met, solving structures by MicroED is going to become routine,” says Gonen. And then, maybe Gonen’s membrane proteins will finally reveal how they form biological pores.