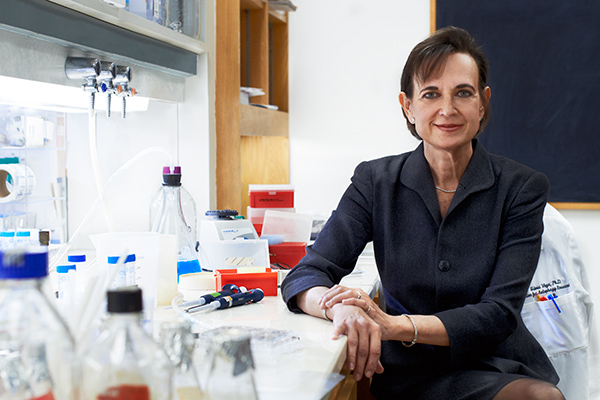 To survive in an ever-changing environment, cells require an assortment of parts—but not all at the same time. As needs change, proteins and organelles become obsolete or fall into disrepair. This debris could muck up a cell pretty quickly. But a process called autophagy tidies up the mess.

Unwanted parts are engulfed in a double-membrane sac, which then fuses with an organelle called a lysosome, where enzymes break down its contents. The bits left behind can be recycled by the cell for new construction.

In her research lab at the University of Texas Southwestern Medical Center, HHMI Investigator Beth Levine is exploring the complex cellular pathways that control autophagy. Each discovery that links autophagy to a life-threatening disease spurs Levine—who began her career as a traditional MD and then gravitated to research—to dig deeper.

“We work on basic biochemical mechanisms, but disease is always in the backs of our minds,” she says.

Since she discovered Beclin 1 in 1998 and demonstrated it to be the first known mammalian autophagy protein in 1999, Levine has directly linked the cellular housecleaning process to cancer signaling and shown that it helps animals fight off infectious disease. She’s also demonstrated that autophagy is required for the longer lifespan associated with caloric restriction in worms and is a big part of the beneficial effects of exercise in mice.

Levine first encountered Beclin 1 during research on viral pathogenesis. When the protein turned up in a screen for molecules that interacted with an inhibitor of programmed cell death, she noticed that its genetic code lay in a region of the genome often missing in breast and ovarian tumors of patients who have no family history of the diseases. This suggested that the protein encoded by the gene might play an important role in cancer prevention.

We’re looking into whether exercise’s effects on aging, certain types of cancer, and delaying the onset of neurodegenerative diseases are through autophagy.

Levine’s team soon found that Beclin 1 protects mice from lethal viral encephalitis. After her team reported those antiviral effects in the Journal of Virology in 1998, they learned that a yeast gene closely related to the mouse gene beclin 1 is essential for autophagy. Levine’s team was able to restore autophagy in cultured yeast cells lacking their own autophagy gene by giving them Beclin 1. Boosting levels of the protein also restored autophagy in cultured human breast cancer cells that were missing a copy of beclin 1.

The discovery that Beclin 1 enables autophagy suggested to Levine that it had a broad and vital role in keeping organisms healthy. “Autophagy is the only mechanism inside a cell for degrading pathogens and damaged organelles,” she notes. Excessive accumulation of such debris had already been linked to aging, cancer, and neurodegeneration, and Levine suspected that understanding Beclin 1 might shine a light on those conditions.

Her team’s 2003 finding that mice with only one functional copy of the beclin 1 gene developed more spontaneous tumors than normal mice did provided convincing evidence that Beclin 1 interferes with mammalian cells’ spiral into cancer.

Levine’s lab group continues to study how autophagy helps suppress tumor formation. The team has discovered that the proteins produced by two potent oncogenes, Akt and EGFR, directly modify Beclin 1, inhibiting its ability to trigger autophagy. In work published in Science in 2012, they showed that Akt’s interactions with Beclin 1 contribute to Akt’s ability to transform healthy cultured cells into tumor cells. In 2013, they reported in Cell that EGFR must interact with Beclin 1 to drive tumor progression and resistance to chemotherapy in animals with non-small cell lung tumors grown from human cells.

One of Levine’s most recent discoveries concerns the impact of exercise on disease. Since debris recycling helps supply a cell’s energy-producing mitochondria with the raw materials for making the energy molecule ATP, Levine wondered whether autophagy might help muscle cells keep up with exercise-induced energy demands.

Levine’s team showed that, in mice running on treadmills, autophagy increased in skeletal and heart muscle, as well as in the liver, pancreas, fat cells, and brain. Mice whose cells were unable to dial up autophagy during exercise had less endurance. They couldn’t boost the uptake of glucose to fuel their muscles. In addition, exercise did not protect autophagy-deficient mice against diabetes induced by a high-fat diet, as it does in normal mice.

“I think it’s going to help explain a significant part of the mechanism underlying the beneficial health effects of exercise,” Levine says of the findings, which were published in Nature in 2012. “We’re looking into whether exercise’s effects on aging, certain types of cancer, and delaying the onset of neurodegenerative diseases are through autophagy.”

Levine is optimistic that targeted drugs may help patients with diseases that may benefit from increasing autophagy. Through her studies of Beclin 1’s interaction with a protein made by HIV, her lab has created a peptide that holds promise. A short, 18-amino-acid segment of Beclin 1 that binds to the HIV protein inhibited growth of the virus in cultured cells. The peptide also was remarkably effective in inducing autophagy in virtually all cultured cells examined and in multiple tissues in mice. “This small piece of Beclin was sufficient to do the job of the whole protein,” Levine says.

In fact, the peptide induces autophagy that protects against West Nile encephalitis in mice and clears protein aggregates associated with Huntington’s disease in lab-grown cells. Since describing the peptide in Nature in February 2013, Levine’s team has been working to make it into a drug-like molecule.