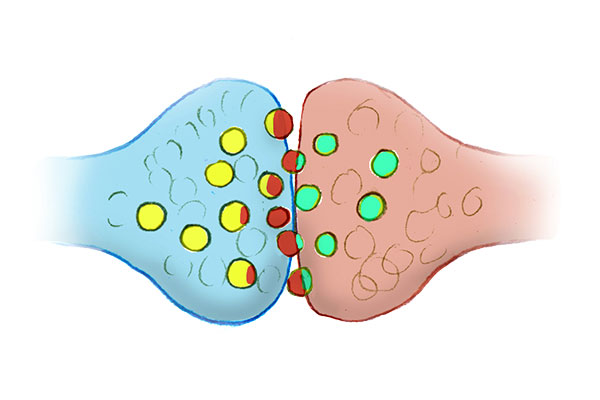 In the body, neurons use molecule-filled sacs, called vesicles, to communicate. When it's time to send a message, a neuron’s vesicles fuse with its membrane, releasing their contents into the synaptic space between the cells. If there is a lot to communicate, the neurons burn through their vesicles quickly.

Rapid replenishment of vesicles is of the utmost importance—the neurons need to be ready to send the next batch of signals. HHMI Investigator Edwin Chapman and his team at the University of Wisconsin recently showed that two calcium-binding proteins, calmodulin and synaptotagmin 7, work together to ensure that neurons have adequate vesicles for communication.

One route of restoring synaptic vesicle supplies depends on calcium and calmodulin. Chapman’s team discovered that, in response to Ca2+, synaptotagmin 7 binds to calmodulin, and this complex initiates the vesicle replenishment pathway. The study, published in eLife on February 25, 2014, clarifies a number of controversies about the function of synaptotagmin 7 in the nervous system.

Now that Chapman knows what’s involved in the pathway, he wants to figure out how the components work together to replenish the vesicles. “Do they clear out release sites so incoming vesicles can dock and fuse? Do they refill the releasable pool of vesicles? Or do they do both?” he wonders. “At the moment, this remains a mystery.”