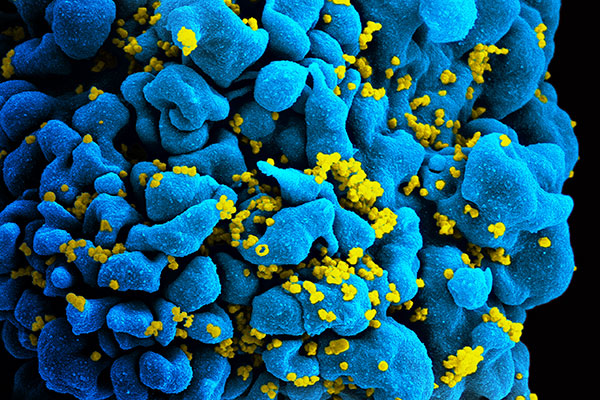 HIV (yellow) attacks the immune system by infecting T cells like this one.
image courtesy of NIAID

A larger-than-imagined reservoir of HIV is evading current antiretroviral therapies.

There was a time when a positive test for human immunodeficiency virus (HIV) meant certain death. Today, the future is much brighter for people with HIV, thanks to advances in drug treatments. But even the most powerful therapies can’t flush out the dormant virus that lurks in a patient’s body—a reservoir that, according to HHMI Investigator Robert Siliciano at the Johns Hopkins University, may be up to 60 times larger than previously imagined.

HIV wipes out the immune system by converting the very cells that are meant to help kill it into virus-producing factories. During an infection, HIV injects its genetic material into activated CD4+ T cells. The HIV DNA integrates into a T cell’s genome, causing it to create more virus. Most of the infected T cells in this viral production mode die, but some survive and go into a resting state in which virus production is shut off. About 100 to 1,000 resting CD4+ T cells per million harbor dormant HIV sequences called proviruses. These sleeper viruses are invisible to circulating immune cells—and to current antiretroviral therapies.

Until recently, scientists were unable to get an accurate fix on the size of the provirus reservoir. Moreover, they didn’t know how many of these stealthy invaders could wake up and mount an attack against the immune system. Siliciano and Ya-Chi Ho, an HHMI international student research fellow, published a technique in the October 24, 2013, issue of Cell that has revealed both the size and the composition of this reservoir. The good news is that about 88 percent of these dormant viruses have genetic defects that make them unable to reactivate. Unfortunately, the remaining 12 percent are fully functional and have the potential to reawaken and attack at any time. The findings suggest that previous calculations vastly underestimated the magnitude of the provirus population—by about 60-fold.

To effectively target HIV, future therapies need to consider these dormant viruses. “It doesn’t mean that it’s hopeless, but it does mean we need to focus on getting an even clearer idea of the scope of the problem,” says Siliciano. Currently, he and his colleagues are working on simple clinical assays to assess reservoir size.