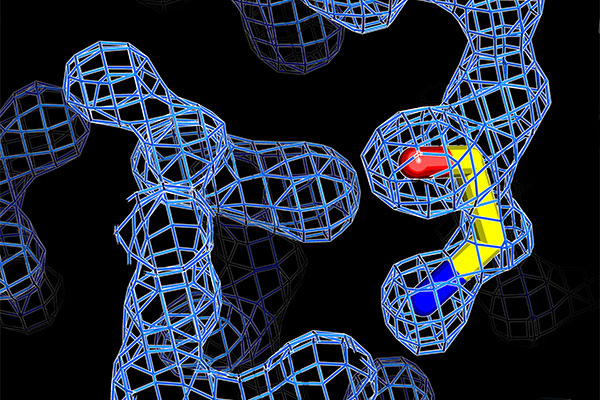 A Fitting Task
by Nicole Kresge

When he signed up for the bioinformatics class, Eli Cornblath knew it wouldn’t be your typical college course. The class had a reputation for being heavy on group assignments and light on memorization and exams. But he had no idea that just one month into the semester he’d be solving the three-dimensional structure of a protein by himself—and doing a better job of it than professional scientists.

James Bardwell, an HHMI investigator at the University of Michigan, teaches the course, called Introduction to Protein Structure and Function. He expects it to be very hands-on. The syllabus promises to teach students how to use online tools to predict a protein’s structure and function from its sequence of amino acids.

“Almost every assignment in Dr. Bardwell’s course was very different from any other I’ve had,” recalls Cornblath, who will be a senior this fall. “It was so much more applied. We did the kinds of things we would do in a real-world lab.”

But even Bardwell didn’t intend for his students to become amateur structural biologists. The protein structure assignment was the brainchild of Scott Horowitz, a postdoctoral fellow in Bardwell’s lab. “I wanted to go skiing,” Bardwell admits. “So I put Scott in charge of teaching the class for a few days.” He expected Horowitz to assign a simple lab exercise on measuring distances between molecules that taught the students about protein structure. But the assignment didn’t excite Horowitz. “I thought it would be a lot more fun to actually do some real crystallography and solve a structure,” he says.

Horowitz figured the hands-on activity would not only teach the students about x-ray crystallography—a technique generally reserved for grad students and postdocs who learn on the fly during laboratory research —but also reinforce what they had learned during lectures about the chemistry and geometry of amino acids, the building blocks of proteins.

So, after a lecture explaining the fundamentals of x-ray crystallography and protein model-building, Horowitz informed Cornblath and the 56 other undergraduates in the class that they would be using their computers to solve the structure of an unknown protein.

Each student received a digital file containing the protein’s electron density map—a framework showing an outline of the protein’s structure. They also sat through a tutorial on a computer program called Crystallographic Object-Oriented Toolkit, or Coot, which they would be using to view the map and build the protein.

Horowitz positioned a single amino acid on the map to show where the protein chain started. It was up to the students to figure out the identities of the 94 remaining amino acids and how they fit into the electron density map to form the final structure. The students’ grades would be based on the accuracy of their sequence and the quality of their protein structure’s geometry.

Aided by Horowitz and Philipp Koldewey, a graduate student in Bardwell’s lab, Cornblath and his classmates attacked the problem. Using Coot, they moved and rotated amino acids, one-by-one, into the density map, adding the ones that best fit inside the framework of their growing protein chains. Bardwell likens this process to doing a three-dimensional puzzle. “You have these blob-like electron density maps that look like lava flows on your screen, and you have to figure out which amino acids fit in there.”

“At first it was a little challenging,” Cornblath admits. “But I was able to pick up [the concept] quickly, and I was really excited to work on it. It almost seemed like a computer game.”

Cornblath finished the project within a week—two weeks before the deadline. “It was entertaining,” he says. “I’ve always enjoyed visualizing stuff in three dimensions and using reasoning. I had a few things I had to get done, and when I asked myself which one I felt most like doing, it was always this project.”

Others felt the same. “I got so addicted to it, I had to force myself to stop and do some of my other work,” says Arya Ahmady, who will also be a senior this fall. “It was more like a really fun puzzle than an actual assignment. But it was also great because I felt like I was applying all the principles I’d learned in biochemistry.”

Even more encouraging to Horowitz and Bardwell was the fact that several of the students’ structures were more accurate than the published structure. Their versions had better geometry and fewer steric clashes—positions where two atoms overlap in space in ways that violate the laws of chemistry—while still fitting the density map as well as the published structure. Cornblath’s structure was completely clash-free, something professional crystallographers rarely, if ever, achieve.

The two instructors believe the accuracy stems from the fact that the students were not given the protein’s sequence. Instead, they had to carefully look at the electron density map and figure out how each amino acid fit. Crystallographers, on the other hand, generally know the sequences of their proteins and can rely on that information to help them fit a density map.

Horowitz, Bardwell, and Koldewey published a paper about the assignment in Biochemistry and Molecular Biology Education on July 18, 2014. Horowitz hopes the publication will inspire other instructors to add similar projects to their courses. “There’s no reason why people can’t start using the assignment in their own classes tomorrow,” he notes. Bardwell plans on repeating the assignment next time he teaches the class.

The team is also developing a Coot-based video game. “Given how much the students enjoyed it and how good they were at it, we thought that we could crowd source the task of solving unknown structures,” explains Bardwell. They’ve enlisted Firas Khatib at the University of Massachusetts Dartmouth. Khatib helped HHMI Investigator David Baker design Foldit, an online game in which players around the world help scientists fold proteins.

If the assignment’s popularity is any indication of the game’s potential, Bardwell and Horowitz should have no problem luring players to the challenge of solving protein structures.