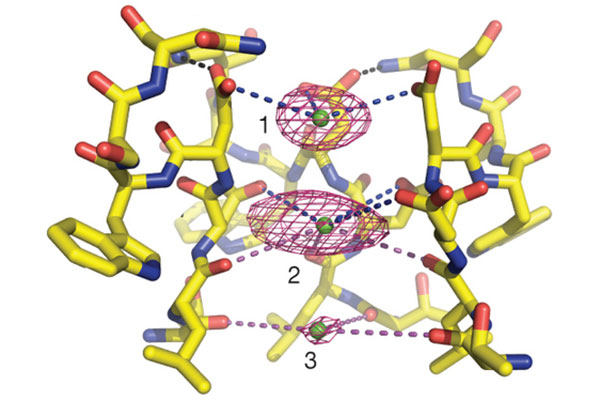 A close-up of the calcium channel crystal structure shows the location of the three ion checkpoints.
Reprinted by permission from Macmillan Publishers Ltd: Nature (505, 56-61), copyright 2014

Every second, more than one million calcium ions must squeeze through individual calcium channels into cardiac muscle cells to keep the heart beating, among other functions. This is an impressive feat—especially because sodium ions are the same size as calcium ions and are 70 times more plentiful outside the cells, yet few of them pass through the tiny pores. Using x-ray crystallography, HHMI Investigator Ning Zheng and his collaborators in William Catterall’s group at the University of Washington recently caught a calcium channel in action and revealed the secret of its selectivity.

As they reported in Nature on January 2, 2014, the key to this filter is a series of three checkpoints that ions must pass through. Each of these three sites selectively binds to hydrated calcium and rejects other ions. The first site, near the mouth of the pore, recognizes calcium and admits it into the channel. Once inside, the calcium ion binds to the second site, where it remains until it’s pushed out by the next calcium ion entering the channel. The final checkpoint, near the end of the channel, helps move the ion into the cell’s interior.

Next, Zheng would like to figure out how drugs disrupt these calcium channels. “The mammalian voltage-gated calcium channels are the molecular targets of therapeutic drugs in the treatment of hypertension, angina pectoris, and cardiac arrhythmia,” he explains. By understanding how the drugs interact with calcium channels, scientists can create new compounds that work better and have fewer side effects.