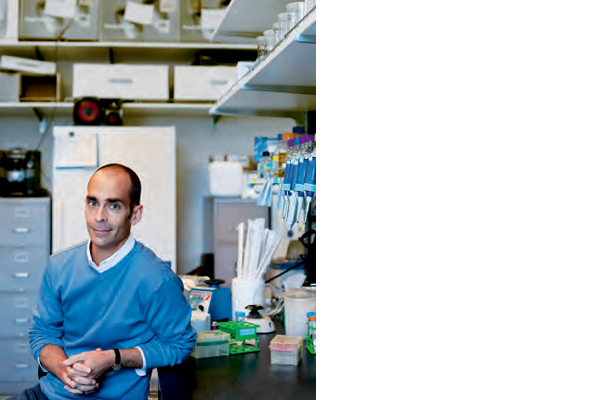 Joe Thornton brings his view of science as a potent social and political force into the classroom.

In his University of Oregon lab, Joe Thornton is a laser-focused scientist probing the molecular evolution of steroid hormones and their receptors.

When Thornton enters the classroom of “Biology and Politics,” however, his focus broadens to embrace his background in the liberal arts and globe-trotting environmental activism. As director of the humanities-styled course, he leads discussions, sometimes heated, on topics as far ranging as toxic chemicals, intelligent design and evolution, and the use of science in the Bush and Obama administrations.

“Science is a form of culture. It’s how we explain to ourselves the physical world and our place in it,” says Thornton, an HHMI early career scientist. “That makes it an enormously potent social and political force.”

Students in Thornton’s course debate how science should inform politics in a democratic society. Along the way, they question their most basic assumptions about the nature of scientific knowledge, he says. “We explore readings in sociology, philosophy, and the history of science to articulate different views of the relationship between scientific expertise and authority in culture.”

Thornton created the course after he received a 2006 Presidential Early Career Award for Scientists and Engineers.

Thornton didn’t plan on being a scientist. As an undergraduate in the 1980s at Yale University, he majored in English, with a focus on literary theory. “It was interesting and seductive, but it was divorced from any tangible reality,” he says. Amid a growing national debate on the environment, he turned to political activism.

He worked as an activist for Greenpeace, where he spent nine years translating complex science to help improve public understanding of policies related to chemical pollution. Focusing on the emerging issue of endocrine disruptors and their effects on reproductive health in humans and wildlife, he worked with community groups around the world, testified before Congress, and authored hundreds of reports and articles, all without formal training. At age 30, he entered Columbia University to study molecular biology and evolution.

“During my time with Greenpeace, I became fascinated with the study of natural systems,” he says. “That experience changed the way I look at science. I saw the enormous political authority that science carries in society. I also saw the ways in which politics and culture shape the scientific debate itself.”

The debate on endocrine disruptors continues, he notes, making the issue a good opening case study for his Biology and Politics course. Recognition of the potential health dangers of these chemicals has grown over 20 years, with legislation aimed at addressing them introduced in Congress in each of the last three years. Senator John Kerry (D-Mass.) and Representative Jim Moran (D-Va.) introduced a new bill in July.

“Each time I teach the course, several students say that it fundamentally changed the way they think about science,” Thornton says. “They come to see science as a rigorous but creative form of self-expression—a way of contributing to culture. That’s extremely rewarding for me as a teacher and scientist.”