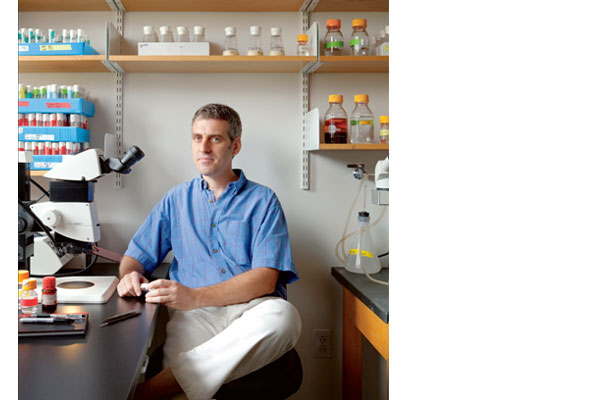 The tiniest hairs on fruit fly larvae have complex genetic controls
that David Stern almost missed—until he took the fruit flies out
of their cozy incubators.
photograph by Mark Mahaney

David Stern wants to know how the fly genome behaves in the real world.

The average fruit fly doesn’t live in a climate-controlled lab. Most must fend for themselves, seeking food, evading predators, and enduring chilly nights and hot days. These are the real-world conditions under which the insects have evolved, says HHMI investigator David Stern, and many of the marks that evolution has left on the fly’s genome will be difficult to decipher unless researchers consider those factors as they design their experiments.

It’s a lesson that Stern’s lab group underscored with its latest discovery about the genetic components that control the production of tiny hairs that poke from the surface of newly hatched fly larvae. The hairs, called trichomes, show up in roughly the same spot in most species of fruit flies, and Stern’s lab has solid evidence that evolution has made a point of keeping them around.

“It’s very clear from the evolutionary pattern that the flies care very much [about their trichomes],” he says. Biologists, on the other hand, have yet to figure out why they’re there. “We have a lot of stories about what the trichomes are for,” Stern says, “but they’re all just tall tales.”

Trichomes captured Stern’s attention with their deceptive simplicity: researchers had long known that when a gene called shavenbaby is missing in flies, they don’t make the trichomes; instead, they hatch out bald. Stern found that shavenbaby was more active in some species than in others, and the level of activity correlated with species-specific variations in trichome patterns. He set out to identify nearby DNA sequences that contributed to these variations.

“We started bashing away at it very naively, imagining that all we had to do was go one or two kilobases upstream from the promoter, find the single nucleotide change, and we’d be home by Christmas,” he remembers.

Ten years later, many of the microscopes in Stern’s lab are still focused on the larval trichomes. His group’s methodical search for regulators of shavenbaby has taken them far from the gene itself, and the story keeps getting more complicated. They’ve analyzed the DNA within 93,000 base pairs of shavenbaby and found six separate sections of DNA that promote the gene’s activity. Five of these enhancers have acquired sufficient mutations during evolution to produce new trichome patterns in various species.

“This is for a gene whose job is to put these silly little hairs on the cuticle,” Stern says. “But even this very, very simple little piece of morphology is built by a gene with a very complex architecture—and that complex architecture evolves through lots and lots of tiny little changes.”

Curiously, the three enhancers farthest from the gene at first appeared to be unnecessary. Although the sequences could turn on a nearby gene when they were spliced into an artificial system, when Stern’s team eliminated the enhancers in living flies, larvae emerged from the lab incubator with the usual carpet of trichomes.

That result was discouraging, Stern says, until he and postdoctoral researcher Nicolás Frankel realized that the comfortably warm incubator where they kept their flies was a poor imitation of the conditions under which the insects evolved. “Flies in nature probably experience a dramatic range of temperatures,” Stern says, from hot sunny fields to chilly orchard nights. Protein production and developmental networks are strongly influenced by temperature, and Frankel and Stern wondered whether the enhancers they had found might be important for ensuring that the Shavenbaby protein was manufactured under suboptimal conditions.

We have a lot of stories about what the trichomes are for, but they’re all just tall tales.

When they grew flies at temperatures well above and below their usual laboratory conditions, but still within the range of temperatures flies might experience in nature, Stern’s team saw what they had suspected all along: larvae produced far fewer trichomes when the three most distant enhancers were missing. The “extra” enhancers contributed to the fly’s ability to produce trichomes, but they were called on only when temperatures fluctuated outside the ideal range. “We took that as our first evidence that these enhancers are there to provide a function for flies that live in the real world,” Stern says.

Stern’s group published their findings in Nature on July 22, 2010. He says he suspects that these types of regulatory regions—known as shadow enhancers—are quite common and that they probably protect organisms from many kinds of environmental and genetic variability. “One of the messages we’re really trying to get across is that a lot of the genome may be encoding functions that you won’t detect in laboratory conditions, because they provide a function in the real world, where temperatures are variable, where food resources are variable, where the genetic background of individuals changes each generation,” he says.

Stern is eager to continue digging into the shavenbaby gene, because he’s convinced that it still has big secrets to reveal. By way of example, he points out that the DNA flanking the shavenbaby enhancers is more evolutionarily conserved than the enhancer DNA itself. “That’s basically 95 percent of the DNA surrounding the gene,” he says. “And I have no idea what that 95 percent is doing. None. That’s a lot of DNA to explain, and it’s a lot of evolutionary conservation to explain. Those sorts of observations make me feel like we’re missing something big.”