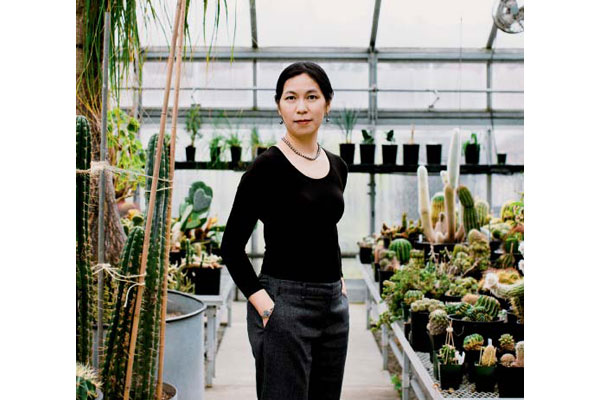 Keiko Torii was drawn from an interest in cancer research to a career in plant biology, but
keeps her eyes open for relevance in both areas.
Photograph by Jose Mandojana

Keiko Torii is piecing together how stomata control plant respiration.

When Keiko Torii gazed through the microscope at a mutant Arabidopsis thaliana leaf covered in specialized cells called meristemoids, she saw more than a beautiful anatomic anomaly—she saw a new way to probe a fundamental system in developmental biology.

Meristemoids are stem-cell-like precursors that give rise to a pair of guard cells, which form stomata—tiny pores on the skin of almost all land plants that are crucial for the exchange of water vapor and gas during photosynthesis. Close study of meristemoids has largely eluded scientists because the cells, by nature, are transient and few and far between.

“When I looked at this,” Torii says, pointing to a poster-size image of the mutant leaf with a tightly packed honeycomb of DayGlo blue meristemoids hanging on her office wall at the University of Washington, “I thought maybe this could be an economical tool to study what makes a meristemoid a meristemoid.”

To do so, she compared the readout of activated genes, known as a transcriptome, from the meristemoid-covered Arabidopsis mutant with the transcriptomes of two other mutants: one covered in only waxy pavement cells that shield plants from the elements, and one with stomata only. The study, published in the September 2011 issue of Plant Cell, revealed a novel protein that dramatically relocates during stem-cell divisions of a meristemoid. 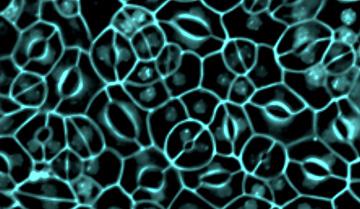 As a biology student in Japan, Torii was set on a career in medical research. “I wanted to study cancer,” she says. But when she graduated from the University of Tsukuba in 1987, a buzz from the world of plant science turned her head. Researchers had successfully transferred specific genes from the microbe Agrobacterium into Arabidopsis thaliana, a tiny mustard plant commonly studied in labs.

“I thought, ‘Wait a minute, that’s kind of interesting. Now we can study plants by manipulating their genes in a much more sophisticated way,’” says Torii, a leafy-green cardigan draped over her shoulders.

Torii joined a plant lab for her graduate studies and today is a Howard Hughes Medical Institute–Gordon and Betty Moore Foundation (HHMI-GBMF) investigator and a world authority on Arabidopsis genetics. Her lab focuses on the development of stomata, which she calls the “tiny breathing mouths” of plants. These pores take up carbon dioxide from the atmosphere, which plants use to build biomass, and exchange it with oxygen and water brought up through the root system.

For nearly a decade, Torii’s lab group has published a suite of papers that describe the proteins that act together to control stomatal development. The team zeros in on the function of each protein through experiments that manipulate how they are expressed.

Their most recent transcriptome comparison revealed a protein that appears to help regulate how meristemoids divide asymmetrically, producing two cells with different fates. Intrigued, a graduate student in Torii’s lab, Kylee Peterson, labeled the protein in a wild-type Arabidopsis embryo with a fluorescent tag and captured microscopic images of the plant’s paired embryonic leaves, called cotyledons, every 30 minutes as they developed.

A time-lapse movie made from the images shows the expressed proteins grouping together on the polar opposite side of the cell from where a division will occur. After the meristemoid divides, the proteins typically increase in only one of the cells—the one that will continue on the direct path of stomatal development.

Once the meristemoid differentiates into a guard cell, the protein disappears. “It is very specific to this asymmetric dividing state and has this interesting behavior,” Torii says. The team named the protein POLAR.

The group found that the behavior of the POLAR protein depends on a gene identified by Dominique Bergmann, an HHMI-GBMF investigator at Stanford University. The gene, breaking of asymmetry in the stomatal lineage, or BASL, stays in the nucleus of meristemoids but also relocates before asymmetric cell division and marks the cells that will eventually divide to become guard cells.

When BASL function is lost, the POLAR proteins “look very confused,” Torii says, pointing at a time-lapse movie of the developing mutant plant. “They don’t show this clean localization.”

She hopes to learn what makes POLAR unique, which may help point to the differences and similarities between plants and animals. Although plant and animal cell divisions are fundamentally different, her other studies in stomatal development revealed remarkable similarities between transcription factors controlling development of stomatal lineage cells and of animal cell types, such as neurons and muscle fibers. In the future, Torii says, her studies may “provide unexpected molecular tools to manipulate cell proliferation and differentiation in animals for organ regeneration or to cure disease, maybe even cancers.”