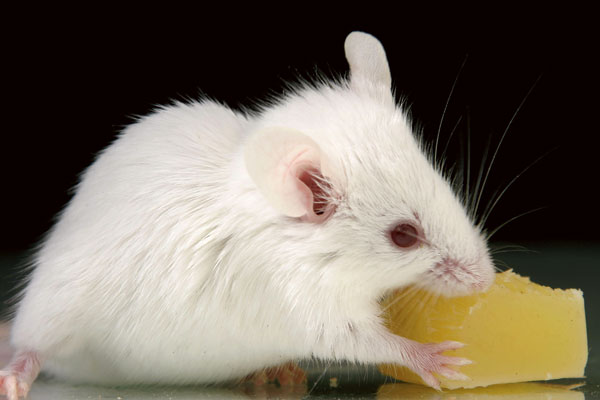 When certain neurons are turned on, mice eat ravenously.

Within minutes of the activation of specific neurons in a mouse’s brain, the animal heads straight for its food dish. Despite the fact that the mouse is well fed and it’s not mealtime, it eats voraciously, as if starved. The mouse continues overeating until scientists turn off the neurons.

For Scott Sternson, a group leader at HHMI’s Janelia Farm Research Campus, this display is proof that a single group of neurons can modulate a complex behavior. Previous research suggested that feeding habits might be strongly affected by one neuron type, called agouti-related peptide (AGRP) neurons. When AGRP or a related molecule is injected into the brain of a mouse, it eats more. But the neurons had never been activated directly.

Sternson and his team relied on optogenetics, the use of light to activate neurons. They engineered AGRP neurons in mice to fire when illuminated by blue light from an optical fiber. When researchers switched on the light, the mice ate—more than 20 times the usual meal. The more neurons that were activated, the more the mice ate. When the light was quenched, the mice stopped eating.

It was thought that activating another neuron type, called POMC neurons, would have the opposite effect—that is, activating them would cause mice to eat less. Indeed, when Sternson’s team activated POMC neurons optogenetically, mice ate 40 percent less and lost 7 percent of their body weight in one day. This effect was abolished in mice with blocked melanocortin receptors, a key target of POMC neurons.

Sternson’s next goal is to identify the downstream neuron populations that AGRP neurons work through and construct a full circuit in the brain that controls eating behavior.