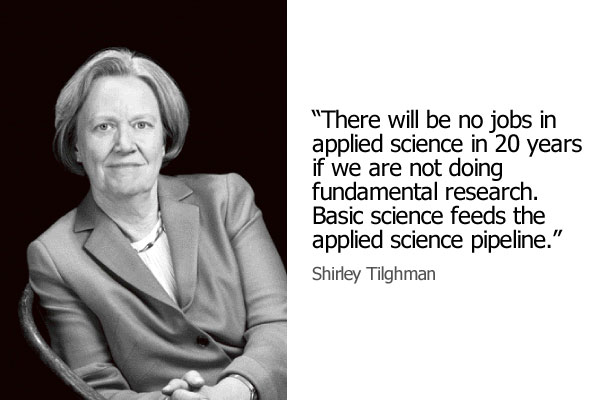 The Future of Science
interview by Amy Maxmen

Getting realistic about biomedical trainees.

Shirley Tilghman is an outspoken advocate for young scientists. She was an HHMI Investigator at Princeton University from 1988 until 2001, when she was named university president—the first woman and first scientist to hold the position. Tilghman will have a hand in modernizing the prospects for scientists as the recently appointed chair of a National Institutes of Health (NIH) study on the future of the biomedical workforce in the United States.

What are your goals for the NIH biomedical workforce panel?

Ultimately, we want to create a biomedical enterprise that produces the best science and brings out the best in the people engaged in it. Today the training path has become too long. The average age of a biomedical scientist receiving a first NIH grant is 42. I don’t know a single person who thinks that’s optimal for generating good science. So the question is, why does the path take so long? And are there things that could be done to speed it up?

Do other people agree this is a problem?

Definitely. There has been welcome recognition that business as usual is not acceptable, and changes must be made if we are to sustain the vibrancy of the U.S. biomedical research enterprise. Many feel that significant changes in how NIH supports the biomedical workforce must be on the table, including reducing the number of trainees and changing the way they are supported.

Could you elaborate on the solutions you have in mind?

At the root of the problem is the fact that we are overproducing Ph.D.s. As a consequence, there are too many people chasing too few jobs and too few grant dollars. This problem will only get worse in the next decade, given the current federal budget.

I believe there could be changes made to the structure of the typical biomedical research laboratory. The typical lab consists of about 10 trainees, a technician, and a principal investigator. The majority of those trainees will not become principal investigators, because those jobs are not multiplying. And at the moment, there aren’t enough career alternatives to capitalize on the time investment of these trainees. So I think we need to change the scenario.

From years of being a mentor, I know that not all students want a career running their own lab and raising money. Instead, they want to do what they love: research. Perhaps more members of a lab could be permanent employees, and fewer could be trainees. We need to explore such options.

Absolutely. There will be no jobs in applied science in 20 years if we are not doing fundamental research. Basic science feeds the applied science pipeline. They are deeply complementary to one another. Everyone knows the applied work is important, but frankly, you can’t do it without the basic stuff.

Speaking of tighter budgets, how do you feel about cuts to the research and development budget pushed by many in Congress?

There are many aspects of the budget cuts proposed by the House of Representatives that give me great concern. At the highest level, the cuts have the potential of undermining the future prosperity of the United States, by consuming our “seed corn”—the innovation that has been the basis for the staggering vitality of the U.S. economy. The cuts to the Department of Energy and the Environmental Protection Agency certainly fall into that category; green technology is likely to be one of the biggest growth industries in the future, and it would behoove the United States to be in the forefront of that economic wave. On a deeper level, investing in green technology is so important because the future of the globe depends on our finding economically viable alternatives to fossil fuels. I don’t know a single serious research university today that is not making major investments in research and education in these areas.

Are policy makers open to hearing from young investigators?

Yes, in fact, I think the public discourse on science is better now than any time in my memory. Under this administration, we have highly distinguished scientists in important positions, who speak effectively about science. We have an administration that is pro-science and makes a clear distinction between what is scientifically knowable and what can be known only through religious faith. I welcome the disappearance of politics from science that many of us found disturbing in the past.

How has research prepared you for being a university president?

For a long period university presidents were economists, but I think a scientific background is actually beneficial. Science taught me how to ask questions, collect data, and analyze information. In that way, what I do now is not so different than what I did before.

Shirley Tilghman is a member of HHMI’s Science Education Advisory Board.