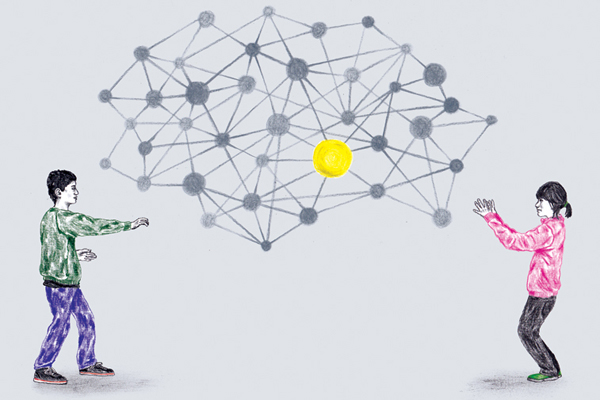 A Brighter View of the Brain in Action
by Jeffrey M. Perkel

A protein sensor is beefed up to illuminate the language of neural networks.

Playing catch seems easy, right? As a ball arcs toward you, you reach out and snag it. Within the brain of the catcher, however, that seemingly simple action requires the interplay and integration of neural networks so complex that scientists have barely begun to map them.

The problem, at least in part, is lack of tools. Electrophysiology—implanting electrodes into the brain to record electrical activity—is fast and exquisitely sensitive, but also invasive (no fun for the catcher) and inaccurate: researchers can't know exactly which cell types they are measuring. Fluorescent synthetic sensors, which make signaling cells light up under a microscope, can probe many cells simultaneously. But the dyes are toxic and invasive (also a problem for the catcher), and they don't last long.

GECIs aren't used in ballplayers or any other humans, but they can tell us a lot about the brains of mice, flies, and worms. Unfortunately, they have not performed as well as synthetic sensors or microelectrodes. Ideally, sensors will detect individual action potentials, the electrical pulses that are the language of neural signaling. But GECIs, being less bright, less sensitive to calcium, and relatively anemic upon activation, act more like weak dimmers than light switches—not to mention, unreliable monitors of neural activity.

“We had been frustrated with older versions of GCaMP,” says Vivek Jayaraman, a Drosophila neurobiologist and group leader at HHMI's Janelia Farm Research Campus. When he used the proteins, they did not even flicker in response to activity that was easily detectable with electrodes. Daniel Huber, a postdoc with Janelia group leader Karel Svoboda, likewise found early GECIs too dim and insensitive for work in mice.

A better reagent was required. Enter protein engineer Loren Looger, who joined Janelia Farm as a group leader in 2006. Setting his sights on improving GCaMP2, Looger first solved the protein's molecular structure. He then iteratively tweaked its sequence to make the protein brighter and more responsive, sharing the intermediate options with anyone willing to try them.

He found two willing partners at Janelia Farm: Jayaraman, who tested the proteins in fruit flies, and Svoboda, who did the same in mice. HHMI investigator Cornelia Bargmann at Rockefeller University rounded out the mix with the roundworm Caenorhabditis elegans.

The researchers tested numerous variants—first in bacteria, then in animals. The best was GCaMP3, which differs from its predecessor by just four amino acids. But that slight alteration makes a big difference. GCaMP3 is 3 times brighter in the absence of intracellular calcium (labeled cells can be found even in the absence of calcium signaling) and about 10 times brighter in its presence, Bargmann estimates. The protein also is more finely attuned to calcium fluctuations—a crucial detail, Looger says, because “If calcium goes up and the protein doesn't [respond], it's as if a tree fell in the woods and no one heard it.”

For Drosophila researchers, the sensor fills a key technology gap, says Jayaraman: implanting electrodes in a fly isn't exactly easy. “Although we cannot hope to abandon electrophysiology, there's no question that, for a certain set of questions, this is a tool that can go pretty far,” he says. Jayaraman's lab is using GCaMP3 to learn what happens in the central brain of tethered walking and flying fruit flies as they respond to the sensory world around them.

Svoboda's team is using GCaMP3 to illuminate brain circuits that respond when mice walk on a treadmill or sense contact through their whiskers. A video of the primary motor cortex in live animals dramatically illustrates the approach: the scene resembles a Christmas display, with individual neurons flickering gaily.

Bargmann receives regular requests for her GCaMP3 worms—and not just from neurobiologists. “People who weren't doing this kind of experiment in the past have asked for them,” she says, “because now... it looks like something that a normal person could do, and not some superhuman feat.”

One goal at Janelia Farm is to develop and share broadly useful imaging technologies. Looger estimates some 200 researchers have used GCaMP3, including Joe Fetcho, a researcher at Cornell University who studies the neurobiology of zebrafish movements. “This is the first [GECI] that is good enough that it will allow us to [detect individual action potentials] with some confidence,” Fetcho says.

“GCaMP3 is certainly the best thing out there right now,” says Looger. But he isn't finished. “There's still some headroom,” he says. “GCaMP3 is not the ultimate GECI.”