Where Does It Hurt?
by Marc Wortman

Researchers are getting to the molecular details of pain’s circuitry to answer the question with real specificity.

The shelves in David Julius’s lab at the University of California, San Francisco, could be confused with those in a traditional herbal medicine shop. They hold bottles labeled “menthol extract” and “capsaicin,” the substance that gives heat to hot peppers. The eye-watering scents of Szechuan peppers, wasabi, and herbs waft through the air. They might seem unlikely tools for one of the world’s most advanced neurobiology pain research centers, but Julius uses this trove of natural ingredients to probe the molecular world of pain. 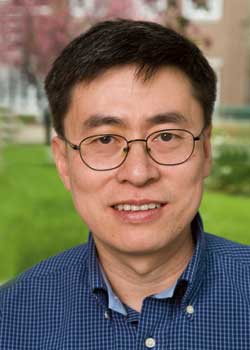 Neurologists and pain specialists long struggled to prove that controlling pain can speed a patient’s recovery after surgery or an injury and that people with chronic pain have a genuine malady that’s not “all in their head.” Today the biomedical world recognizes that pain is a real and pressing health care issue that needs improved diagnosis and more effective treatments. Until about 15 years ago, though, researchers could study pain based only on patient behavior and subjective responses to questions about “where” and “how much” it hurts. As a result of emerging molecular findings, new pain medications and diagnostic tools are being developed.

Neuroscientists often use natural ingredients—like menthol, capsaicin, and wasabi extracts—that stimulate nerve cells to react just as they would in response to painful cold and heat, for example, or to inflammation and chemical irritants. Drawing on electrical recordings, imaging, molecular techniques, mouse models, and genetic studies, scientists can explore the nervous system as it reacts to “pain” at the subcellular level. Their studies have revealed many molecular pathways that regulate pain perception, including specialized ion channels that open and close to send pain signals along nerves to the spinal cord and brain. They have also begun to explain the systemic changes in response to pain sensation that can cause chronic disorders.

HHMI scientific officer Ed McCleskey, who spent much of his research career studying pain, believes such progress will translate into health care benefits. “We have been using more or less the same aspirin and morphine variants for centuries now. But a wave of recent basic science discoveries has begun to transform the pain field, and they are already yielding insights for finding new ways to treat pain.”

The Many Types of Pain

Aspirin and opiates work just fine for most of us most of the time. But plenty of people don’t benefit from either drug or can’t handle their serious drawbacks, which range from stomach irritation and excessive bleeding to addiction and respiratory suppression. The devastating daily reality of uncontrolled chronic pain far exceeds the ability of today’s medicines to help. Every year, at least 116 million adult Americans experience severe chronic pain—more than the number affected by heart disease, diabetes, and cancer combined—at a cost of $560 billion annually in direct medical expenses and $635 billion in lost productivity, according to a June 2011 report from the Institute of Medicine.

The body detects and converts pain stimuli into electrical signals at the fine nerve endings of “nociceptors,” sensory neurons specialized to respond to pain. Their axons, which conduct electrical signals, are only a millionth of a meter in diameter but can be more than a meter long, with one end located where a stimulus is detected—at a fingertip, for example—and the other end in the spinal cord, where it forms a synapse, or communication junction, with a second cell that sends the signal to the brain. The nociceptor’s spinal synapse is highly sensitive to opiates and other agents that can alter pain perception. The cell bodies of nociceptors and other sensory neurons sit just outside the spinal cord in clumps called dorsal root ganglia; action potentials—short-term changes in electrical charge—pass through the ganglia on the way to the spinal cord.

To convey signals from a peripheral organ to the spinal cord, the axon depends on a variety of molecules. Some convert a physical or chemical event into a small electrical signal at the peripheral nerve ending; others amplify the signal and send it along the length of the axon. Molecules at the synapse convert the electrical signal into a chemical signal, triggering release of a neurotransmitter that activates the postsynaptic neuron. Other molecules tune transmission of pain signals. Various types of ion channels—proteins that create pores in cell membranes—serve as detectors, amplifiers, and electrical-to-chemical translators, while receptors for hormone-like molecules modulate the activity of the channels. 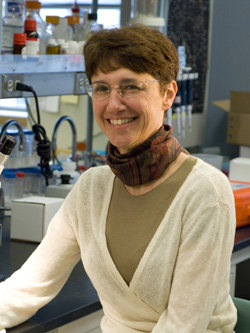 When everything works, the pain system triggers behaviors that lead us to flee danger or to rest and recover from an injury. But it doesn’t always work right. In chronic pain, for instance, signaling can become hyperactive so that even the lightest touch hurts or, in extreme cases, electrical signals fire for no apparent reason. Researchers have recently begun to describe how this malfunction, known as central sensitization, makes nociceptor synapses dangerously hyperactive, as occurs in some mysterious and hard-to-treat pain disorders, such as neuropathy, chronic inflammatory pain, and fibromyalgia.

Nerve cell ion channels selectively allow the passage of four types of charged atoms: positive ions of sodium, potassium, and calcium, and a negative ion, chloride. The movement of these ions across a membrane creates an electric current that transiently alters the cell’s membrane voltage. The past two decades have seen an avalanche of discoveries of ion channels related to pain sensation.

In the 1990s, Gail Mandel, now an HHMI investigator at the Oregon Health and Science University, and her colleagues Simon Halegoua and Paul Brehm at New York’s Stony Brook University were exploring the variety of sodium-selective channels in mammals. Sodium channels act as molecular amplifiers, turning small electrical signals into action potentials that can conduct for long distances along an axon. In 1997, Mandel discovered a sodium channel, now called Nav1.7, which is abundant on sensory neurons. From the channel’s location and density, the researchers theorized that it plays a role in pain perception.

Human genetic studies strongly support the idea. Erythromelalgia, a rare disease in which patients periodically feel severe burning pain without any sensory stimulus, is caused by a mutation that increases Nav1.7 activity, rendering nociceptors hyperexcitable. Another mutation that diminishes Nav1.7 activity causes a rare disease in which patients are profoundly insensitive to burns and some other kinds of tissue damage. A few pharmaceutical companies are testing compounds to control Nav1.7 as a way to suppress pain.

Since then, Julius and others have characterized several TRP channels and their interconnected roles in sensory perception. HHMI investigator David Clapham, an ion channel expert at Children’s Hospital Boston and Harvard Medical School, also studies the channels, looking at their roles in a variety of sensations. He characterized a member of the human vanilloid TRP subfamily, TRPV3, found in the skin and other major organs, and showed its involvement in controlling some aspects of temperature sensitivity. His lab also identified common plant compounds used as spices and insecticides that activate TRPV3, TRPV1, TRPA1, and other TRP channels, leading to irritations and allergies.

A major new direction in pain research began with the discovery of the family of Mas-related gene (Mrg) receptors by HHMI investigator David Anderson and his colleagues, including Xinzhong Dong, at the California Institute of Technology. Mrg receptors are found exclusively in sensory neurons. Dong, now an HHMI early career scientist at Johns Hopkins School of Medicine, has shown that while certain Mrg receptors function in itch sensation, one appears to function like the body’s naturally occurring opioid receptors, which help to dull pain. Dong is testing compounds that target this Mrg receptor, looking for ways to avoid narcotic and other side effects from opiates, which would benefit people with chronic pain.

The initial discovery that abnormal central sensitization can lead to pain hypersensitivity came from Clifford Woolf at Children’s Hospital Boston and Harvard Medical School. Woolf is now generating hypersensitive and normal human pain neurons in his laboratory from fibroblasts using stem cell techniques to characterize their differences and, perhaps, find ways to regulate their firing without harming other necessary physiological functions. He is also looking at ways to deliver pain relievers directly to hyperactive nociceptors while leaving normal ones untouched.

Undoubtedly, other molecules of normal and pathological pain signaling await discovery, thereby offering additional possibilities for improving pain treatment. “I tell my medical students,” says Woolf, “that pain will be treated completely differently 10 years from now.” Physicians may one day treat pain based on both the source of pain within the patient’s nervous system and the individual’s genetic predisposition for responding to a specific therapy. Perhaps the day isn’t too far off when a physician will ask where it hurts and nearly all patients will respond, nowhere.