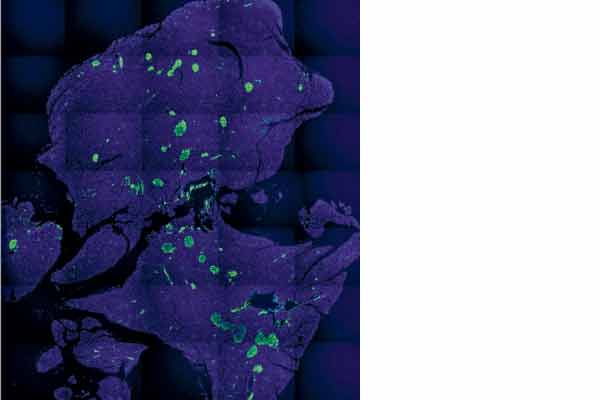 Now You See It, Now You Don’t
by Nicole Kresge

A disappearing receptor could hold the key to beta-cell growth and insulin production.

For years, diabetes researchers have sought to understand what regulates the growth and death of insulin-producing beta cells. According to new research by HHMI investigator Seung K. Kim at Stanford University, the key may lie in a receptor that disappears as an organism ages.

When mice, humans, and other species are developing, their beta cells multiply by replicating themselves. As organisms age through adolescence and then adulthood, their ability to produce beta cells decreases. Kim discovered that as mice grow older their beta cells produce fewer receptors for a protein called platelet-derived growth factor (PDGF).

“The loss of that receptor is an important feature that’s programmed as you age and may underlie the decline of beta-cell proliferation that you normally see,” Kim says.

To test whether loss of the receptor is the reason for decreasing beta-cell proliferation, Kim and his colleagues created mice with beta cells in which the PDGF gene could be inactivated. When the gene was inactivated in three-week-old mice, they developed mild diabetes, indicating a decrease in beta-cell levels.

Conversely, when the scientists turned on the receptor in older mice that had stopped producing beta cells, their beta cells began to grow again.

“This told us that activating the pathway might overcome normal restrictions imposed by aging,” Kim says. More importantly, the new beta cells adjusted their function appropriately and didn’t, for example, cause the mice to lose control of insulin regulation or become hypoglycemic.

Kim then confirmed the link between the PDGF receptor and beta-cell growth. He discovered that when PDGF binds to its receptor, it activates production of a protein called Ezh2. This protein regulates the production of another protein, p16INK4a, that controls beta-cell proliferation. The team published its findings October 20, 2011, in Nature.

Kim is now looking at why PDGF receptors disappear as mice age, which could lead to therapies for diabetes. “You could imagine a one-two punch: if you can stimulate beta cells to reexpress the receptor in adults, then you could conceive of trying to stimulate those cells to grow,” says Kim.