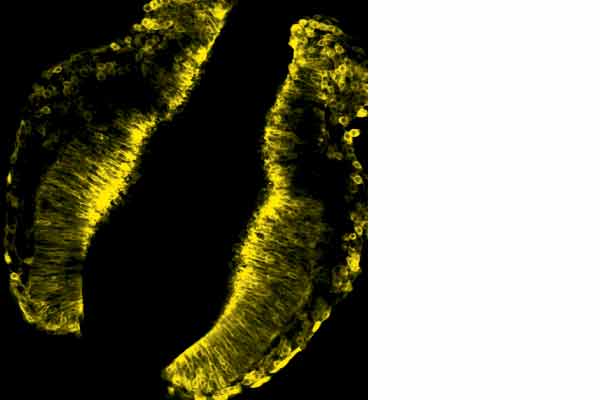 Birth defects such as spina bifida result when the neural
tube (shown here) fails to close properly during development.
Image and Video by Christina Pyrgaki / The Rockefeller University

How Much Is Too Much?
by Nicole Kresge

Studies in mice suggest long-term folic acid supplementation may increase the incidence of some birth defects.

Since 1998, the federal government has required that most flour be fortified with folic acid to help prevent some neurological birth defects. However, research by HHMI investigator Lee Niswander indicates that, in some cases, folic acid may have the opposite effect.

During the third or fourth week after conception, tissue destined to become the nervous system rolls up to form the neural tube. But if gaps remain in the tube, birth defects such as spina bifida ensue. Studies have shown that folic acid fortification reduces the chance of neural tube defects by 30 to 40 percent, leading to the recommendation that pregnant women supplement their diets with the vitamin.

“It is still pretty much a mystery what folic acid does to help the neural tube close,” Niswander says. “That’s really where we started our studies.”

Niswander and her colleagues at the University of Colorado School of Medicine focused on just a handful of the more than 240 genes involved in neural tube closure. They created mice with defects in five genes essential to different steps in the closure process. As reported September, 15, 2011, in Human Molecular Genetics, the mice were fed either a regular diet or a diet supplemented with folic acid. The supplemented diet increased mouse serum folic acid to levels similar to those of a human taking recommended amounts of supplements. To the researchers’ surprise, three of the five mutant mice strains experienced more neural tube defects and embryo losses when fed a diet high in folic acid.

“Something else is going on there,” says Niswander. “By giving folic acid to women, we see a decreased incidence of neural tube defects. That could be because the neural tube is closing. But it could also reflect that some embryos with a genetic defect don’t survive to the stage of neural tube closure.”

Niswander still believes that folic acid supplementation during pregnancy is a good idea, but she advises caution before increasing doses, as some groups have advocated.

“Our mouse studies indicate that at least some genetic mutations can respond detrimentally to more folic acid,” says Niswander. “There may be a balance that needs to be struck [to accommodate all of our] different genetic make-ups.”