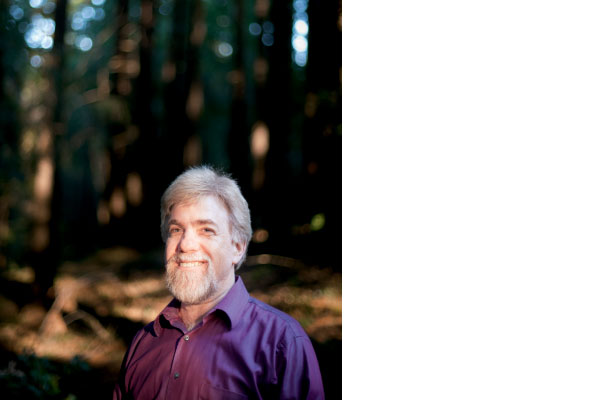 Ted Goldstein used to be a vice president at Apple; now he’s a graduate student applying bioinformatics to understand health and disease.

Computer geek Ted Goldstein spent 30 years working in Silicon Valley, rising to prominence at Apple, the company famous for its mantra, “think different.” He oversaw the building of software tools that let engineers create Mac and iPhone applications. In 2008, however, Goldstein traded in his industry success for the modest life of a graduate student.

Today, the pale-bearded 50-year-old is back at his college alma mater, the University of California, Santa Cruz. He is earning a Ph.D. in the biomolecular engineering lab of HHMI investigator David Haussler. Goldstein focuses on using bioinformatics—the application of computer algorithms to dissect biological processes—to improve people’s health. “I think it’s just the most interesting thing there is,” he says.

Haussler, whose group analyzes glitches across the human genome that fuel cancer, is thrilled to have the former Apple executive. “We don’t usually get someone at that level who says, ‘Okay, I’m an accomplished individual, but I want to learn a new field,’” Haussler says. It was no small sacrifice. Goldstein, a fundraising trustee for UC Santa Cruz, takes no salary, though he does have his own office with a door and a view of the redwoods.

Biology always fascinated Goldstein. As a computer science major in college, he wrote a program for a biology professor that aligned RNA sequences for comparison. It was his first bioinformatics work, he says, though “we didn’t have that word yet.” After graduating in 1983, he worked at Xerox’s ParcPlace Systems, Sun Microsystems, and elsewhere before joining Apple as a vice president.

From 2002 to 2007, Goldstein led the team that created developer tools (including the Xcode software development system) for Apple’s transition to Intel chips and helped engineer the iPhone’s operating system, iOS. “Pretty much everyone in the Apple universe uses the tools he helped define,” says Bertrand Serlet, a former senior vice president at the company.

While Apple is a fabulous firm, Goldstein says, one downside is that “last year’s insanely great product is this year’s landfill.” He wanted to build something that would last. He left in 2007 to work on bioinformatics at a medical diagnostic startup but quickly “realized I didn’t know anything.” So he went back to grad school, diving into all the required courses, relearning some material from the ground up. “I had to work much harder on my math skills,” he says. But other things come easily. “I am used to getting up in front of a room of 4,000 people and making a presentation,” he says with a laugh.

Haussler hopes other stars from the high-tech world will follow Goldstein’s example. “He thinks much more broadly than the typical Ph.D. student.” Given Goldstein’s industry savvy, Haussler relies on him for strategic advice on matters such as building the group’s sizeable computer infrastructure.

For his Ph.D. work, Goldstein’s ambitious vision is to create a “Facebook for cancer.” Called MedBook, its algorithms would analyze individual patients’ cancer mutations so that they can receive tailored treatments where possible. The idea is to link patients, their doctors, clinical scientists, and bioinformatics researchers—and, Goldstein hopes, revolutionize the search for cancer cures.

The late Steve Jobs’s battle with pancreatic cancer is a big inspiration for his focus on cancer genomics, Goldstein says. He can still hear the last words the Apple CEO said to him when he headed off into bioinformatics: “Good luck changing the world again.”