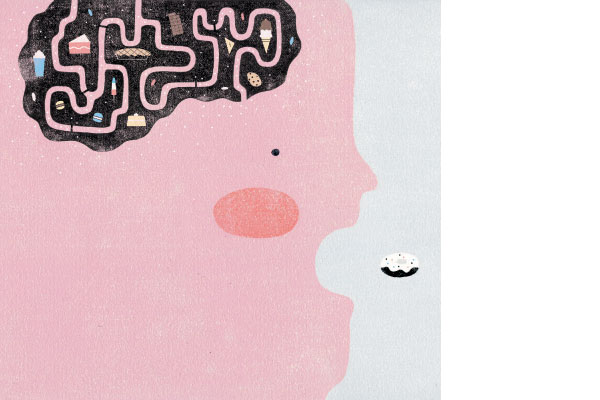 Appetite and other deep-seated desires could be modified by altering brain ion channels, according to research at Janelia Farm.

Scott Sternson has always wondered what drives behavior, especially those fundamental motivations required for survival. Hunger, for example, is so crucial that it must be evolutionarily “hard-wired” deep within the brain. After all, as Sternson observes, “if the animal doesn’t eat, it dies.”

Melding the diverse disciplines of synthetic chemistry, structural biology, and computational modeling, Sternson and Loren Looger, both group leaders at HHMI’s Janelia Farm Research Campus, have uncovered clues about the brain circuitry that controls deep-seated behaviors, like that irresistible urge to visit the dessert table.

The pair devised a noninvasive method to stimulate individual brain neurons or clusters of neurons in live, conscious animals—a remote control for the brain, of sorts. They demonstrated the technique by converting gluttonous mice into champion dieters. The researchers published their findings September 2, 2011, in Science.

You can blame those dessert cravings in part on ion channels, explains Sternson. Ion channels are molecular pores, donut-shaped proteins embedded in the surface of neurons that allow charged particles to enter and exit the cells. Like a subway system’s turnstiles, ion channels have moving parts, opening and closing to ensure passage of only the proper type of ion, single file, by the millions every second. Like their mass transit counterparts, some ion channels, called ligand-gated ion channels, won’t budge until presented with a ticket—in this case, a chemical neurotransmitter. The ensuing electrochemical impulses that race through neurons create thoughts, emotions, and, ultimately, behavior.

Sternson’s scientific interest in hunger began when he was a postdoc in the laboratory of HHMI investigator Jeffrey Friedman at the Rockefeller University. In the mid-1990s, Friedman identified a hormone called leptin that exerts powerful control on appetite by acting on a region of the brain called the hypothalamus. Sternson’s goal was to understand the neuronal wiring in the hypothalamus that controls appetite. He wanted to identify the different neurons and deduce the contribution of each toward evoking hunger. The problem was that no tools were available to systematically probe brain wiring with the precision he needed.

Neurons perform their assigned duties by firing or turning silent in response to chemical neurotransmitters, depending on what types of ion channels they contain. Neuroscientists can study how isolated neurons work in a lab dish. However, to connect neural circuitry to complex behaviors, Sternson wanted to probe the neuronal wiring in living mice. To do that, he needed a way to “re-ticket” individual ion channels within a neuron or small group of neurons by forcing them to respond to a unique, synthetic neurotransmitter—one not normally seen in nature.

Sternson began by collaborating with Looger, a protein chemist, to exploit the modular structure of ligand-gated ion channels. In these channels, the ion pore domain (IPD) is tethered to an independently functioning ligand-binding domain (LBD). Scientists had previously engineered “chimeric” ion channels by genetically splicing the LBD from one type of channel to the IPD from another. Such hybrid channels transport ions specified by the IPD but in response to the neurotransmitter recognized by the grafted LBD.

To create an ion channel that could respond to a novel neurotransmitter, Sternson and Looger needed to design a new LBD and synthesize a neurotransmitter that could bind and activate it—two tall orders, Sternson says. “The thinking was that it would be very difficult. It was an uncertain challenge for us whether or not we could even modify these complex ligand-binding domains.” Nonetheless, they persevered.

Starting with the LBD that recognizes acetylcholine, the team applied a combination of protein structural chemistry and molecular modeling to predict which parts of the LBD were most likely to contact this natural neurotransmitter. They then created dozens of channels, each containing a mutation at one or more of the 19 positions on the LBD predicted to be important for acetylcholine binding.

Next, they designed a compound that would unlock their newfangled ion channels. Starting with a chemical analog of acetylcholine, the researchers synthesized a collection of 71 slightly modified versions of the compound. When they tested each one for its ability to selectively activate or silence each of the hybrid ion channels, they found many combinations that worked.

The ultimate test of the artificial ion channel system, the researchers knew, would be trying it out in a living organism. So Sternson inserted a neuron-silencing version of one of his designer ion channels into specific hypothalamus neurons, called AGRP neurons, in mice. His team had previously tailored these neurons to stimulate voracious appetites in the mice. When Sternson injected the animals with the appropriate synthetic neurotransmitter, their overindulging habits subsided dramatically.

With their toolbox of new ion channels and neurotransmitters in hand, the Janelia Farm researchers intend to examine the role of specific neurons in other complex behaviors. “To me, that’s a real frontier for neuroscience and will ultimately allow us to demystify some of the processes that underlie why we do what we do,” Sternson says.