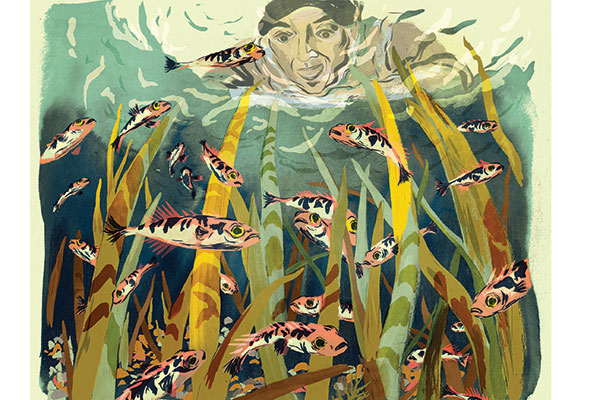 Collecting data in the great outdoors brings a fresh perspective to work in the lab.

Dan Bolnick has a summer ritual. Almost every year for the past decade, he’s made the 2,400-mile trek from his home in Austin, Texas, to a campsite on Vancouver Island. It’s no secret that British Columbia’s majestic snow-capped mountains, pristine lakes, and mossy old-growth rainforests are perfect for off-the-grid getaways. But the HHMI early career scientist isn’t after a little R&R. He’s more interested in a little thumb-sized fish that makes its home in the island’s remote lakes and streams.

In his lab at the University of Texas at Austin, Bolnick uses a unique combination of ecology, evolutionary biology, genetics, and immunology to understand how the three-spined stickleback fish, also known as Gasterosteus aculeatus, interacts with parasites. His goal is to uncover the genes and immune processes the fish uses to protect itself against helminths – parasitic tapeworms that are acquired by eating infected zooplankton. And, thanks to the last ice age, the myriad lakes and streams that dot Vancouver Island provide the perfect site for Bolnick’s summertime field studies.

Every watershed, every river system, every lake represents a replicate of an unparalleled evolutionary experiment.

Twelve thousand years ago, retreating glaciers created countless lakes and streams on Vancouver Island – a gulf island about the size of Belgium that lies just northwest of Seattle. These bodies of water were eventually colonized by the stickleback’s marine ancestors, who proved remarkably successful in adapting to niche environments in their new freshwater dwellings. Across these different habitats, sticklebacks today exhibit incredible variation in size, behavior, skeletal morphology, feeding ecology, and breeding color.

“Every watershed, every river system, every lake represents a replicate of an unparalleled evolutionary experiment,” says Bolnick.

Bolnick estimates he’s visited nearly 100 different lakes, streams, and estuaries on Vancouver Island since he started studying the stickleback 15 years ago. His field trips range from six weeks to two months and can involve as few as one or two scientists or as many as 25. The days are full, and long – in the summertime, island daylight can last up to 16 hours, and the team takes full advantage of it.

“One drawback of living in Texas and doing field research in British Columbia is the limited time that we get to spend up there,” says Bolnick. “We try and make the most of it, which means a lot of early mornings.” Each summer, Bolnick’s goal is to collect enough fish, and data, to sustain his group until the next year’s trip.

Most days in the field start with stickleback collection. “The terrain up there is really physical in certain places,” explains Jesse Weber, a postdoc in Bolnick’s lab. “Sometimes you have to hike an hour just to get to the lake that you’re hoping to sample from, and then you have to be able to transfer all those fish back out.” The fate of those captured sticklebacks depends on the experiment du jour.

If the fish are destined for genetic mapping studies, their tail fins are placed in ethanol for DNA extractions, while their bodies (including parasites) are preserved in formaldehyde; everything is shipped back to Texas for analysis. Bolnick’s team uses the data from these specimens to compare the resistance genes and parasites found in different populations of sticklebacks.

Other sticklebacks are taken to neighboring lakes, where they are placed in enclosures; the idea with this cohort is to see how they fare in a different ecological niche. Bolnick wants to know if the transplants are more resistant to their native parasites than to unfamiliar parasites.

Still other fish are placed in coolers and taken to a field station. There, they are mated with sticklebacks from other lakes and streams. The eggs produced from these encounters then go by car to the Bamfield Marine Sciences Centre (see Web Extra sidebar, “Opportunity Knocks”) – a drive as long as eight hours – where they are raised to adulthood and then bred to create second-generation hybrids. A year and a half later, the Bamfield fish retrace the road trip, returning to cages in their grandparents’ native environments. These experiments will help the scientists identify genes that confer parasite resistance.

Although creating a research program around a field site that takes four days of driving to reach seems impractical, the data Bolnick and his colleagues are collecting might one day help combat parasite-borne diseases in humans. The time away from Austin also gives the scientists a fresh perspective on their research. “Vancouver Island is where some of our best thinking happens,” says Weber. “After sitting there all day long, looking at the fish, we start to view our discipline in a whole different way. I think that almost every evolutionary biologist will say that the field is where some of their best ideas happen, because that’s where inspiration comes from.”