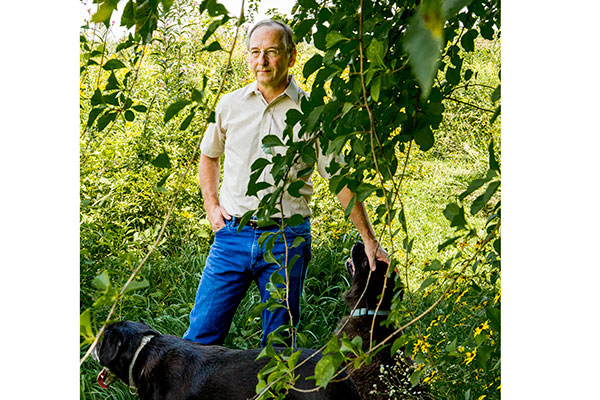 Steady On
by Geoff Koch

When Michael Welsh was a medical student, in the 1970s, textbooks described cystic fibrosis as a lethal genetic disease affecting children.

Cystic fibrosis, or CF, disrupts the ability of cells lining the body’s cavities and surfaces to manage chloride and bicarbonate, key components of salt. This has particularly devastating effects in the lungs, where thick, stringy mucus clogs the airways.

But thanks in part to Welsh and his colleagues, treatments have improved and today’s textbooks read very differently. “Our CF clinic now has more adults than children,” says Welsh, an HHMI investigator at the University of Iowa.

A soft-spoken native Iowan, Welsh is passionate about studying CF. He has focused on the disease, which is caused by inheriting a mutated CFTR gene from each parent, for nearly three decades.

The CFTR gene was discovered in 1989. Welsh was already studying CF and caring for patients with the disease. Armed with the new genetic knowledge, he and colleagues discovered that the CFTR protein forms a channel, or pore, in the cell’s outer membrane through which chloride and bicarbonate flow. They also showed that a “gate” in CFTR controls salt flow by opening and closing the channel.

By the early 1990s, Welsh was looking at how mutations mangle the CFTR channel. He knew that the CFTR gene’s most common mutation, found in more than half of individuals with the disease, produces a misshapen channel. The cell’s quality control machinery recognizes the mutant and rejects it. His team showed that the mutant fails to appear on the cell surface, leaving no pathway for chloride flow.

So Welsh was puzzled by a 1991 paper by Francis Collins, then an HHMI investigator at the University of Michigan. Collins’s lab reported that the common mutant did, in fact, form a channel on the cell surface. But, Welsh noted, Collins had studied mutant CFTR in frog eggs kept at room temperature, while his own lab had studied it in mammalian cells at a much warmer 37 degrees centigrade. So Welsh’s team ran the experiments again at a lower temperature.

“Boom! There it was – a channel that conducts chloride, albeit not as well as a healthy protein,” Welsh says. “Too often, researchers worry when their results differ from those obtained by others in their field. It can be good to explore why results differ, as that can lead to important insights.”

Today, this decades-old research underpins work on a handful of emerging CF therapeutics, including Orkambi. The drug, which mimics the effects of lower temperature to facilitate repair of the ion channel, was approved by the U.S. Food and Drug Administration in July 2015.

Welsh also set the stage for new ways of unraveling precisely how CFTR mutations cause the disease in 2008, when he and colleagues reported in Science that they’d developed a pig model of CF. Until then, researchers had created mice with CFTR mutations; however, mice don’t develop the same symptoms as humans.

Pigs, much closer to humans in terms of biochemistry, physiology, and size, were an attractive alternative. But the mouse was the only mammal ever engineered to reproduce a human disease. The idea of a CF pig seemed so far-fetched that members of Welsh’s team hung a winged pig above the lab bench of the postdoc working on the project.

But the idea worked. Now, Welsh says, “the model is letting us ask new questions about the origins of the disease.” It’s shown how CF wreaks havoc on the lung; in a July 2012 paper in Nature, Welsh and colleagues reported that CF throws off the pH balance in the lung’s airways, crippling the lung’s infection-control mechanism. And it’s revealed how CF disrupts the lungs’ natural self-clearing action; Welsh and colleagues reported in August 2014 in Science that this disruption is due to unusual acidity and decreased fluid production in the lung’s submucosal glands.

Welsh says these insights would have been impossible without the pig model, whose usefulness seems likely to endure.

Welsh jokes that he chose the pig as a model “because I am from Iowa.” He believes the state possesses a unique and subtle beauty often missed by those from the coasts. He’s restored several acres of prairie surrounding the farmhouse where he lives, just minutes from campus but out of sight of any neighbors. “Put that in the article,” he says, laughing. “It might help me recruit people from Boston, the Bay Area, and New York.”

The land had been farmed hard before he bought it. “It was like looking at a hard, old face scarred by the weather,” says Welsh, a fan of former U.S. poet laureate Ted Kooser, who often writes about the Midwest landscape.

Welsh’s acreage now boasts prairie grasses and wildflowers “that were here before white people came.” Its transformation is not unlike the change in the outlook for those with CF. According to the Cystic Fibrosis Foundation, “Today the life expectancy of a person with CF is 41 years of age. This is a dramatic improvement from the 1950s, when a child with CF rarely lived long enough to attend elementary school.”

Welsh believes the dramatic improvements will continue. “I don’t think CF has to be a lethal disease,” he says.