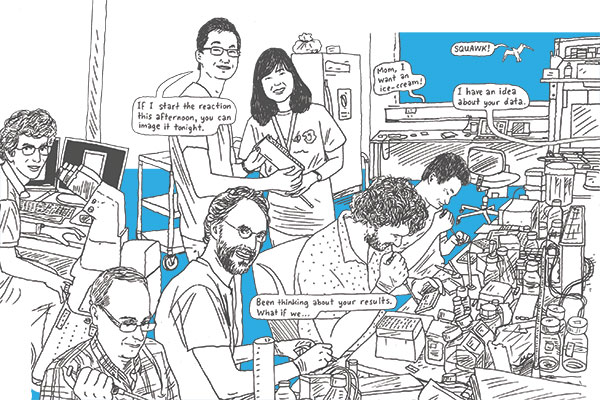 A pop-up laboratory in Woods Hole takes on daring biology research in an unusual setting.

Over the winter, the scientists gather gear, manufacture extra proteins, and bone up on obscure aspects of biochemistry. In June, they descend on the beach town of Woods Hole, Massachusetts – 18, 19, 20 of them from around the world – for six or so feverish weeks of research.

In a small, sunny room overlooking the gray-shingled Marine Biological Laboratory (MBL) quad, they dream up experiments and perform them the same day. They swap tools and ideas and results. At one point, so many people were bunched around one microscope that someone joked they should set up bleachers. “I don’t want to use the word 'vacation,' because it’s not,” says graduate student James Muller. “We’re working super hard. We’re here very late every night. But it’s like a vacation for scientists.” It’s proof, says postdoc Lindsay Case, that “this idealistic way we wish science was all the time actually can happen.”

The idea for this flash mob of a lab, called the HHMI Summer Institute at MBL, came four years ago to three scientists – Michael Rosen of the University of Texas Southwestern Medical Center and Ron Vale of the University of California, San Francisco, both HHMI investigators, and Jim Wilhelm of the University of California, San Diego. They realized they’d all encountered the same phenomenon in their research: large, mysterious clusters of proteins. At first glance, the clusters could be mistaken for detritus floating around in the cell, but they’re not. They coalesce in response to diverse cues, littering the cell with wads of enzymes, signaling proteins, and even RNA, and then disappear. There were tantalizing clues that they helped activate immune cells and control the production of proteins from RNA.

Studying the clusters didn’t fall squarely under any of their research grants, but a Hughes Collaborative Innovation Award gave the trio a platform from which to tackle the challenge. The awards go to large-scale projects of unusually ambitious scope; this one calls for the scientists to meet every summer for five years – from 2013 to 2017 – to broach a new aspect of the problem. In between their summer sprints, they discuss the theme, invite researchers whose interests overlap with it, and gin up experiments.

The approach has been fruitful. The first year, the goal was to see if they could get clusters to form on a synthetic membrane. “We thought it was going to take all summer,” Rosen recalls. “It was the first week. I think it was the first experiment they did. Xiaolei [Su] and Jon [Ditlev] came running up to me and Ron and were like, ‘Hey – it works!’”

Energized, the group then embarked on re-creating in vitro a cascade of events yielding clusters that organize actin filaments, a process involving over a dozen different proteins. Su, Ditlev, and Darius Köster, all postdocs in different labs, put the final experiment under the microscope at 1:00 a.m. just a few days before they were to leave Woods Hole. In the morning, they had a video that shows blue clusters appearing out of the gloom, then a web of red filaments blooming and spreading. It was a beautiful vindication of the summer’s work. “I kept watching the video on the plane, instead of movies,” Su says.

It was an experiment they’d never have attempted back home. “There really is almost no way you can say to a new student or postdoc in your lab, ‘Hey, you’re going to make 13 proteins, and it’s going to take two years, and it probably won’t work at the end,’” Rosen says. But at the Summer Institute, with a few proteins made beforehand by each lab and everyone in the same room to troubleshoot, it became possible.

Last year, they examined how clusters that include RNA form. This year, the goal was to understand how the assemblies modulate signals and whether the signals that trigger cluster formation are the same in different kinds of immune cells. During a lab meeting, results from past experiments and ideas for future ones flew, while sounds of tourists and seagulls wafted through the open window. They now have only hunches about why the clusters exist. But, speculates Jay Groves of the University of California, Berkeley, when their role is finally understood, it may prompt a fundamental change in thinking about molecular organization in cells – a shift akin to researchers’ realization that proteins’ complex structures are key to their function; Groves, an HHMI investigator, participated in this year’s gathering.

It’s hard work, and there are lows as well as highs. Not every tack is as successful as the first year’s re-creation experiment. And if there’s a problem with materials brought from home, it’s not easy to make more.

But the scientists, both junior and senior, say it’s worth it. Grad student Kyle Begovich traces his dissertation directly to his work at the Summer Institute. Su, Köster, and Ditlev, who plan to continue collaborating, say the model forges lasting relationships. “You can meet someone at a conference, and that’s one thing,” agrees Muller. “But to meet someone here and to really get to know them – to break bread, share a beer, share pipettes – that leads to long-lasting collaborations that are not just transient interactions.” It helps that the sessions are hosted by the MBL, which has a collaborative culture, dorms, a dining hall, and other visiting researchers.

Do they ever make it to the beach? They’re on Cape Cod, after all. Lindsay Case laughs at the mere idea. She’s working so intently she’s lost track of the day of the week. After the Institute, she might take some time off. For now, there’s work to do.