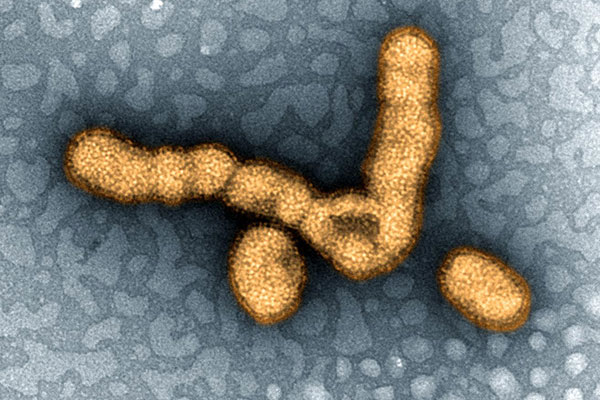 A rare genetic mutation tamps down immune response to influenza virions, like the one seen here.
Image courtesy of the National Institute of Allergy and Infectious Diseases (NIAID).

While catching the flu might be an inconsequential annoyance for many of us, the flu virus can prove life threatening in some people. Research led by HHMI Investigator Jean-Laurent Casanova at Rockefeller University tackled the question of why some patients respond differently to the virus than others.

The study, published April 24, 2015, in Science, describes a two-year-old girl who had been treated for a severe case of the flu at the Necker Hospital for Sick Children in France. The researchers sequenced her exome to hunt down the reason for her immune system’s weakened response to the virus.

What they found was a rare mutation in her IRF7 gene, known to be responsible for the production of antiviral molecules called interferons. Without the functional protein, a patient would have an inadequate response to the flu virus.

“Now we have proof that life-threatening flu, an infectious disease, can also be a genetic disease,” says Casanova, whose past work has identified other mutations that make patients more vulnerable to a variety of infectious diseases.

Understanding IRF7’s role in fighting the flu virus may allow doctors to consider other treatment options, such as administering interferons, when faced with severe unexplained flu.

Rare Genetic Mutations May Make Influenza Life-Threatening for Some
News