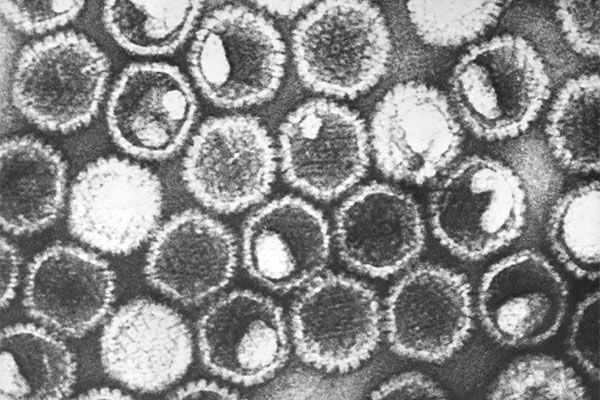 A new vaccine protects against herpes simplex virions, like the ones seen infecting these host cells.
Illustration courtesy of the CDC.

The herpes simplex virus infects millions of people worldwide, yet the pathogen has for decades thwarted attempts to develop a vaccine.

Most efforts by scientists to create a herpes vaccine have focused on glycoprotein D (gD), a protein that triggers the production of protective antibodies. However, attempts to exploit gD in a vaccine have been futile.

“It was necessary to shake the field up and go another route,” says virologist and infectious disease physician Betsy Herold. So she and HHMI Investigator William Jacobs, both at the Albert Einstein College of Medicine, joined forces to take a radically different approach.

Instead of using gD, the researchers used a mutant strain of the virus lacking gD. “Once we had this mutant in our hands,” says Herold, “it was a logical, scientifically driven hypothesis to say, ‘This strain would be 100 percent safe and might elicit a very different immune response than the gD subunit vaccines that have been tried.’”

The study, published March 10, 2015, in eLife, tested the hypothesis in mice. The new vaccine completely protected the mice from the most common herpes infections, without any adverse effects.

If the vaccine works in humans as well as it does in mice, it could have a profound impact on the global prevalence of herpes.