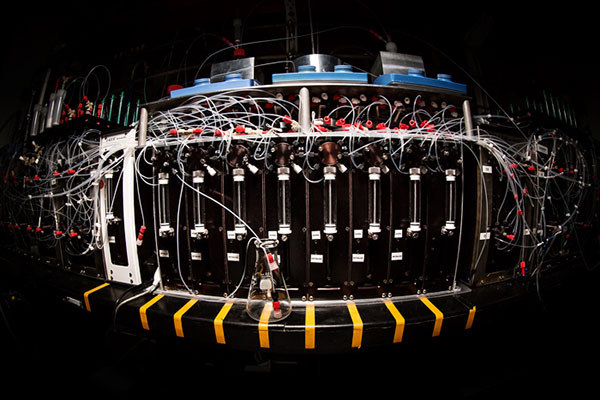 A new invention acts as a molecular 3-D printer.

When chemist Friedrich Wöhler accidently made synthetic urea about 200 years ago, he stumbled upon a feat that has occupied scientists ever since: the synthesis of small molecules.

Today, we use small molecules everywhere. You can find them in most medicines, foods, scientific research – even coffee sweeteners and light bulbs. Yet when it comes to the vast possibilities arising from small molecule production, we’ve barely scratched the surface.

“The bottleneck is synthesis,” says Martin Burke, an HHMI early career scientist at the University of Illinois at Urbana-Champaign. To date, making small molecules has required a customized approach achievable only by highly trained specialists.

But now, Burke and his team have developed an invention that extends that ability from a select few to anyone with a computer. “We’ve created a machine that can do on-demand small molecule synthesis – kind of like a 3-D printer for small molecules.”

Burke says the machine, described in Science on March 13, 2015, was inspired by living organisms. “Nature makes most small molecule natural products through very simple building-block chemistry. … So in a sense, nature is already telling us the answer.”

The machine takes basic chemical modules and stitches them together to create small molecules. When mixed and matched in different combinations, these building blocks can generate a plethora of new small molecules – made automatically and using relatively little effort.

“History speaks strongly to the major impact that can be achieved when you take a powerful technology like molecule making and put it into the hands of everyone,” says Burke, whose long-term vision is to have a website where anyone in the world – a chemist, biologist, engineer, or high school student – can order small molecules to be made and shipped directly to themselves. For now, the machine is already enabling a new biotech company to enhance its drug development efforts; it has the broader potential to expand possibilities in many fields of scientific research.

Lego for the Lab
Bulletin Article