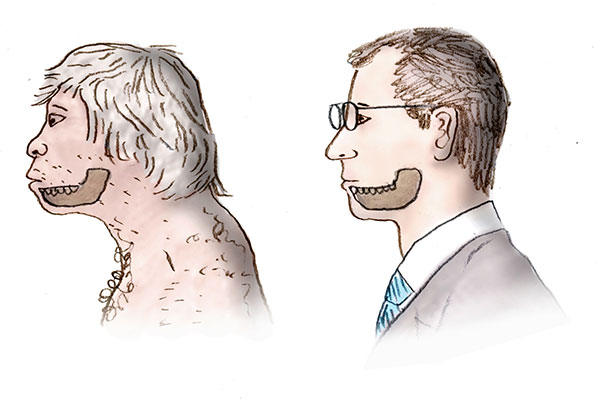 Scientists have successfully retrieved and examined DNA from a 40,000-year-old bone.

And not just any old bone. This human jawbone, found in 2002 in a Romanian cave called Peștera cu Oase, dates back to a critical period of Europe’s history when modern humans were replacing Neanderthals. Scientists have always wondered how this transition happened. Now, the bone’s DNA indicates that it belonged to a modern human whose recent ancestors included Neanderthals.

On average, humans today living outside Sub-Saharan Africa owe about 2 percent of their genes to Neanderthal ancestors. The study, published August 13, 2015, in Nature, shows that 6 to 9 percent of the Oase bone’s DNA came from Neanderthals.

“The sample is more closely related to Neanderthals than any other modern human we've ever looked at before,” says David Reich, an HHMI investigator at Harvard Medical School who co-led the study with Svante Pääbo at the Max Planck Institute in Germany.

The data suggest that the Oase individual had a Neanderthal ancestor as recently as four to six generations back. “It’s an incredibly unexpected thing,” Reich says. “In the last few years, we’ve documented interbreeding between Neanderthals and modern humans. But we never thought we’d be so lucky to find someone so close to the event.”