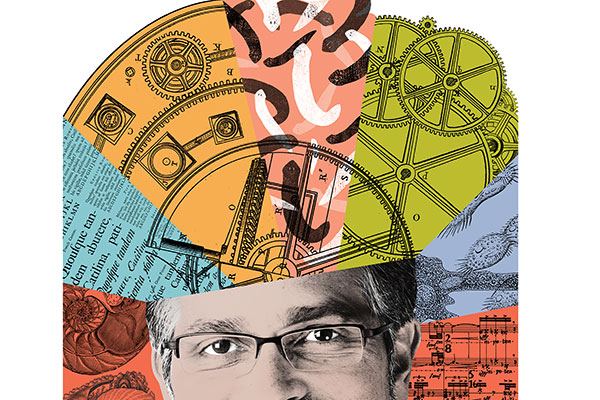 A Curious Mind
by Alissa Poh

In many ways, Alejandro Sánchez Alvarado would have been right at home during the Renaissance, when inductive inquiry was the norm.

Curiosity may have killed the cat, but it’s Alejandro Sánchez Alvarado’s raison d’être. “I don’t have hobbies per se,” he admits, “unless thinking counts. I’ve always wanted to understand where things come from: music, language, ideas. It’s what got me into trouble as a kid and what led me to learn the classical guitar. It’s still a driving force.”

For instance, he remembers wondering as a boy why doors have locks, doing research at the library about the origin and history of locks, and then – to satisfy his curiosity – grabbing a screwdriver and dismantling the lock on his family home’s front door (not realizing that, like Humpty Dumpty, it couldn’t easily be put together again). His questioning mind also led him, upon seeing a van Leeuwenhoek sketch, to build his own microscope, sacrificing his mother’s hairpins to “see the unseen.” Spying his first “animalcule” – a Paramecium or Euglena, he recalls – was thrilling, even if “no one else in my family was terribly interested.” (To this day, his mother has a hard time understanding how her son – an expert in planarian flatworms at Kansas City’s Stowers Institute for Medical Research – makes a living studying worms.)

Sánchez Alvarado is especially captivated by the history of science. While teaching embryology the past few summers at the Marine Biological Laboratory (MBL) in Woods Hole, he’s spent time in MBL’s archives, trying to learn who coined the term “stem cell.” It’s not everyone’s cup of summer fun, he owns, but “exceedingly attractive to me.” He’s unearthed references as far back as the mid-1800s and is intrigued that “this concept likely came from botany, not animal biology.”

He’s also been pondering the Lophotrochozoa superphylum, a diverse group of animals that includes mollusks and flatworms. “They have complex, plastic body plans that are generally underappreciated,” observes Sánchez Alvarado, an HHMI investigator who almost single-handedly established the freshwater planarian Schmidtea mediterranea as a model to study regeneration. “I want to know more,” he adds, so the last two summers he’s conducted plankton tows near Woods Hole to understand the habits, life cycles, and natural history of this diverse group of animals. “I’ve become really good at reading tides,” he says – flood tide being best for collecting samples of these organisms (which he’s now cataloging).

In many ways, Sánchez Alvarado would have been right at home during the Renaissance, when inductive inquiry, or curiosity-driven observation with few to no assumptions, was the norm. “Imagine how much fun it would have been to have discussed the world with Laplace and Kepler, or Lavoisier – he was an engaged citizen as well as a scientist. All were thinkers who saw things others didn’t necessarily see.”

These days, he worries that hypothesis-driven research has all but shoved aside inductive inquiry. “If we paid more attention to the history of science,” he says, “we’d see that innovation has always involved both. We’re able to generate data like never before, but it’s mostly knowledge without much understanding. How about taking a step back: Can we distill new first principles from these vast data?”

This, though, will require changes in how scientific productivity is rewarded. “I adore curiosity-driven research, but in the current biomedical research climate it doesn’t necessarily pay the bills,” Sánchez Alvarado says. “Still, science will be better served if we establish mechanisms to promote such inquiry, as will humankind.”

A shift in that tide may be a while coming. In the meantime, he’ll keep diving down intellectual rabbit holes – perhaps remarking, like young Alice, “Curiouser and curiouser!"

Restarting Regeneration One Step at a Time
News