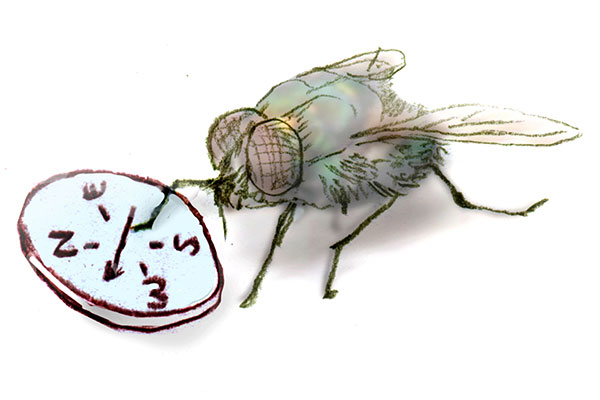 A Compass for Flies
by Anzar Abbas

If you’ve ever made your way through a dark room, you’ve relied on neurons to help maintain your balance and bearings without vision. A fly’s brain is much less complex than a human’s, yet flies, too, can keep a sense of direction in the dark, scientists at Janelia Research Campus have found.

Group Leader Vivek Jayaraman and postdoc Johannes Seelig placed a tethered fly in a virtual reality arena to observe the insect’s neurons as it walks. The study, published May 14, 2015, in Nature, focused on a part of the fly brain called the ellipsoid body, a donut-shaped structure suspected to be involved in directional movement.

The researchers saw a strong relationship between the fly’s orientation relative to its visual surroundings and the neurons activated in the ellipsoid body. When the fly changed direction, even in total darkness, neuronal activity shifted from one part of the ellipsoid body to another, much like the needle of a compass.

“We think we have a window into the fly’s internal model of its world,” says Vivek, who believes ellipsoid body neurons may share characteristics with human head direction cells. “We’re starting to see increasing evidence that the fly may have a lot to tell us about how our own brains work, even when it comes to more complex aspects of cognition.”

Brain Compass Keeps Flies on Course, Even in the Dark
News