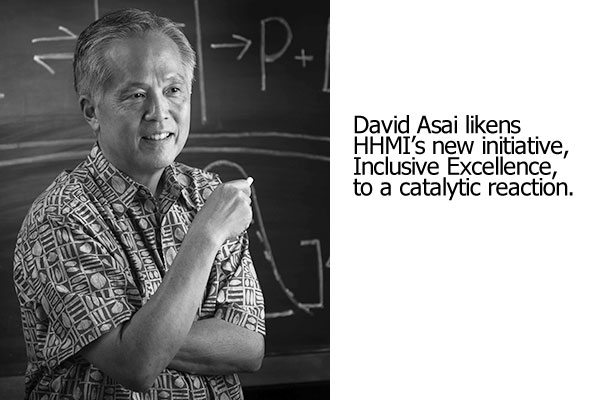 A new HHMI science education initiative reflects some of the same qualities – and rules – as a catalytic reaction, says David Asai, senior director of the Institute’s undergraduate and graduate programs.

A couple of generations ago, students majoring in what we now call the STEM fields – science, technology, engineering, and math – fit a homogeneous profile: most were single, white, and male; they entered college at 18 with solid academic preparation; and they generally graduated in four years.

Today’s STEM students stand in stark contrast to that homogeneity. As noted in the 2012 report from the President’s Council of Advisors on Science and Technology, they instead “come from diverse backgrounds, have widely divergent levels of preparation, may be returning to school after years in the workforce or serving in the U.S. military, and often are employed while in college to support themselves and families.” Many STEM students nowadays – 50 percent of those earning bachelor’s degrees and 20 percent of those earning PhDs – have taken at least one course at a community college, and about 30 percent of undergraduates depend on community colleges for their introductory coursework. Nearly 25 percent of undergraduates are first-generation college students – meaning their parents don’t hold a college degree.  Racial and ethnic “minorities” (who soon will be a majority of the nation’s population, according to U.S. Census projections) and individuals from economically disadvantaged backgrounds are disproportionately overrepresented among transfer and first-generation students, but significantly underrepresented among those students who complete the baccalaureate degree.

These “new majority” students – a term coined by Carol Geary Schneider – are vital for the future of science. They are a large and growing part of the pool that will supply the nation’s future scientific talent. And they bring to science the diversity of perspectives needed for creative problem solving. Unfortunately, today’s educational system fails to enable these students to realize their potential. The baccalaureate completion rate is nearly six-fold better for students who begin college at a four-year institution compared to those who begin in community college.1 And, in a study of a large cohort of students from 1992 to 2000, the baccalaureate degree completion rate for students whose parents had a bachelor’s degree was nearly three-fold greater than for first-generation students.2

A new HHMI initiative, dubbed Inclusive Excellence, challenges colleges and universities to do a better job at providing effective science education for all students, especially those who come to college along nontraditional pathways. Our goal is to catalyze change that will result in lasting institutional capacity for inclusion, reaping benefits well beyond the lifetime of the HHMI grant.

What do we mean by “catalyze change”? In my previous life as a faculty member, I began my introductory biology course every semester by discussing a simple biological reaction – the phosphorylation of glucose in the first step of glycolysis, the cellular process that breaks down sugar to yield useful energy. In this example, the reaction substrates (S) are glucose and ATP, the product (P) is glucose-6-phosphate, and the catalyst (E) is the enzyme hexokinase, as indicated in this simplified equation:

This metaphor reminds us of three rules relevant to the HHMI initiative:

Rule 1: The enzyme is not consumed; it is recycled, available to catalyze the same reaction again and again. The HHMI grant should be a catalyst and not a substrate for campus change. As a catalyst, the grant should enable the institution to change the way it does business, continuing its forward trajectory by implementing inclusive practices that persist.

Rule 2: The enzyme makes the reaction go faster, but only if the reaction is energetically spontaneous. Translating that concept to the Inclusive Excellence initiative, the institution must be ready for change. This means a successful idea cannot depend on one lonely champion; it has to be owned by the institution and engage a large number of faculty and administrators.

Especially during such times, institutional leadership and collective focus are critically important. The good done by colleges and universities depends on people – faculty and administrators – working with all students. Our goal is that, through the HHMI Inclusive Excellence initiative, colleges and universities will undergo these difficult but necessary transitions.

David J. Asai is senior director of undergraduate and graduate programs in science education at HHMI.