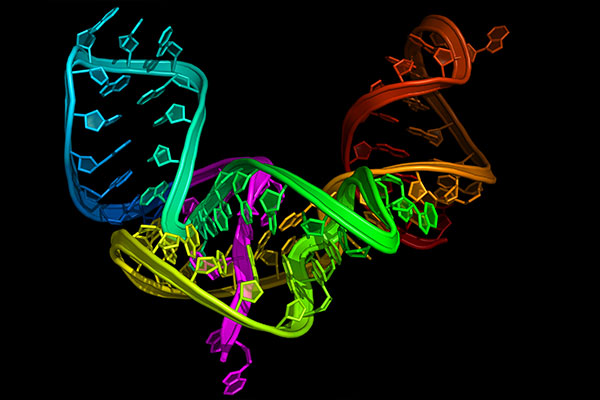 A host cell enzyme is commandeered by a knot-like structure in flavivirus RNA.

Flaviviruses are resourceful. The agents behind West Nile and dengue fever trick their host’s invader-fighting enzymes into helping the virus infect more cells. HHMI Early Career Scientist Jeffrey Kieft is resourceful too. He’s figured out how these pathogens perform their trickery and devised a potential way to put an end to it.

“Scientists discovered a long time ago that when flaviviruses infect a cell, they produce a subgenomic RNA molecule that is essential for viral infection,” explains Kieft. The molecule, called small flaviviral RNA (sfRNA), is actually created by a host enzyme named Xrn1. Ironically, Xrn1 can help defend the host by destroying foreign RNA. But in this case, it helps the invader attack.

To its credit, Xrn1 manages to chew up most flavivirus RNA, but then it stops, and the fragment that remains is the damage-inflicting sfRNA. Kieft and his team at the University of Colorado Denver characterized the spot on the viral RNA that blocks the enzyme from moving along the foreign RNA. It turned out to be a knot-like fold in the RNA that acts as a blockade.

“Xrn1 is chewing down the RNA, progressing really easily, and it runs into this tangled-up RNA structure and just can’t get by,” explains Kieft. “It can’t figure out how to untie the ‘knot.’”

The scientists also learned that if they disrupt the knot-like structure by changing certain nucleotides in the RNA, Xrn1 can successfully chew through the RNA and prevent production of the pathogenic sfRNA. They published their findings in two papers—one in the April 1, 2014, issue of eLife and the other in the April 18, 2014, issue of Science.

If researchers can find a way to prevent viral RNA from forming the knotty snarl, they will have a treatment for flavivirus diseases. “Now that we’ve got a full picture of the structure and have a model for how it stops Xrn1, we can get serious about trying to target the blockade with small molecules to disrupt its structure,” says Kieft.