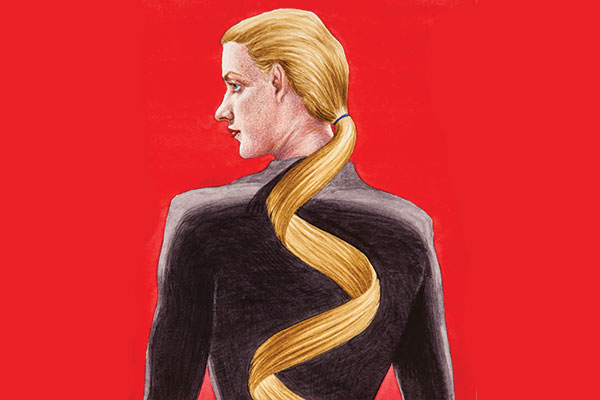 A Twist of Fate
by Jennifer Michalowski

A change in one regulatory gene determines hair color but leaves other important functions intact.

Blond hair has gone in and out of style in Western societies for thousands of years. The heroes and gods of Greek mythology were often graced with golden tresses as a symbol of youth and beauty. In ancient Rome, light-haired women dyed their hair dark to stay in vogue. Through changing fashions and shifting cultural perceptions, the biological basis of hair color has remained poorly understood. Now, research that began with a little fish called the three-spined stickleback has helped answer a long-standing question about human appearance: what gives some people blond hair and others brown?

Sticklebacks have a lot of stories to tell about evolutionary biology. The fish have been adapting to freshwater habitats ever since their ocean-dwelling ancestors found themselves stranded in newly formed lakes and streams at the end of the last ice age. Their physical and genetic variations provide HHMI Investigator David Kingsley with clues about how organisms adapt to changing environments. Because evolution makes repeated use of the same genetic tools, following clues from the fish has sometimes led Kingsley’s research out of stickleback-inhabited waters and into the genomes of other species.

In 2007, Kingsley’s team at Stanford University discovered that changes affecting a single stickleback gene had given rise to pigmentation changes that helped the fish blend into their surroundings, improving their odds of evading predators.

The gene, called Kit ligand, encodes a signaling molecule that helps create pigment-producing cells. Having seen that the gene was used over and over again whenever sticklebacks evolved new skin colors, Kingsley wondered if similar changes might have altered pigmentation in other species.

His team soon showed that different versions of Kit ligand were associated with variations in human skin color. Around that time, another group’s genetic analysis of Northern Europeans linked a region of DNA near the human Kit ligand gene to blond hair color. These changes did not alter the Kit ligand gene directly, however. Instead, in both fish and humans, the alterations were in regions outside the protein-coding gene sequence, where regulatory elements that influence gene activity often lie. “The key marker that’s associated with blond hair color in Northern Europeans is 350,000 bases away from the gene,” Kingsley says. Thus, a regulatory mutation was likely responsible for changing pigment in fish and in humans—consistent with an emerging pattern of evolution-driving alterations that Kingsley has observed throughout his stickleback research.

But the Kit ligand gene does much more than promote pigment production. Kit ligand is one of the most important signaling molecules in vertebrate development. It helps guide formation of blood cells and sperm and egg progenitor cells, in addition to pigment cells. Kingsley wanted to know how a modification to the DNA surrounding Kit ligand could drive common changes in coloration without compromising the protein’s other crucial functions.

Catherine Guenther, a research specialist in Kingsley’s lab, pinpointed a snippet in human DNA near Kit ligand that affected hair follicle function. On closer examination, the team realized that, in Northern Europeans, a single letter of genetic code in this region differed between blonds and brunettes. Swapping out that letter converted the regulatory region from the brunette sequence to the blond sequence.

Placing the gene under the control of the “blond” switch reduced the gene’s activity in cultured human cells by about 20 percent compared to the “brunette” switch. Although the change was small, Kingsley and Guenther suspected they had identified the critical point in the DNA sequence. They tested that idea by engineering mice with a Kit ligand gene under the control of the human brunette or the blond hair enhancer, so that a pair of mice differed only by the single letter in the hair follicle switch.

The otherwise identical mice were easy to tell apart: the animal carrying the blond version of the switch had markedly paler fur. “Sure enough, that one base pair is enough to lighten the hair color of the animals,” Kingsley says. “The genetic mechanism that controls blond hair doesn’t alter the biology of any other part of the body. It’s a trait that’s skin deep, and only skin deep.” He and his colleagues reported on the regulatory switch in the July 2014 issue of Nature Genetics.

The Kit ligand regulatory switch is not the only genetic element responsible for blond hair in humans, however. A few other genetic associations have been tracked down to particular mutations, but actual DNA sequence changes responsible for many human traits remain poorly understood, in part because subtle regulatory adjustments are difficult to identify. “A little up or a little down next to key genes—rather than on or off—is enough to produce different traits,” Kingsley says. “The trick is, which switches have changed to produce which trait?”

Kingsley’s team is searching for other potential regulators of Kit ligand, which they suspect might also regulate the gene’s other functions with similar precision. But he hasn’t forgotten about his favorite fish. “We’re still using the stickleback to identify how general principles of evolution work,” he says.  “The lessons we learn from the fish turn out to apply to lots of other organisms, including ourselves.”