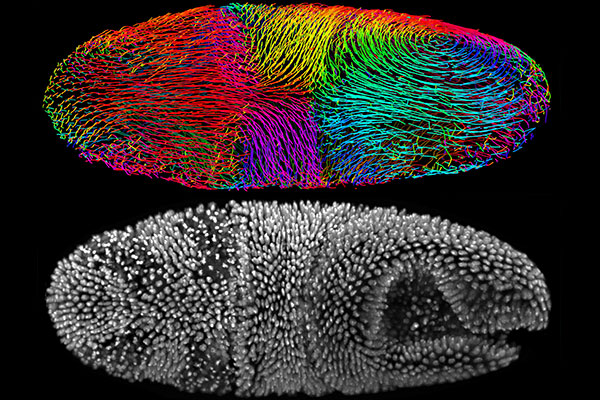 There are tens of thousands of cells in a fruit fly embryo. Recent advances in imaging technology can provide snapshots of each of these cells as they divide and migrate during development. Capturing an image of a growing embryo every 30 seconds or so during the course of a day, however, produces terabytes of data. A team led by Janelia Group Leader Philipp Keller has figured out a way to analyze the data by allowing computers to identify and track dividing cells as quickly as high-speed microscopes can collect the images.

The computer program is based on the idea of clustering three-dimensional pixels, called voxels, into larger units called supervoxels. Using the supervoxel as the smallest unit allowed the researchers to reduce complexity by a thousand-fold. The computer scans groups of connected supervoxels for shapes resembling cell nuclei. That information is then used to locate those nuclei in subsequent images.

Keller and his colleagues—including postdoc Fernando Amat; Group Leader Kristin Branson; and former Janelia lab head Eugene Myers, now at the Max Planck Institute of Molecular Cell Biology and Genetics—also incorporated a final step that allows scientists to check the accuracy of the calculations and fix any mistakes.

To test their program, the team collected images of entire fruit fly, zebrafish, and mouse embryos during development and computationally followed the dynamic behavior of the many thousands of cells in these data sets. They also used these data sets to analyze the development of the early nervous system in a fruit fly embryo at the single-cell level. As they reported online on July 20, 2014, in Nature Methods, they were able to track a large fraction of early neuroblasts—cells that will develop into neurons—and could even predict the future fate and function of many cells based on their behavior.

Keller hopes that others will use the program, which works with data from several types of fluorescence microscopes, to learn more about early development. His team has made the software, which can run on a desktop computer, freely available on his website.