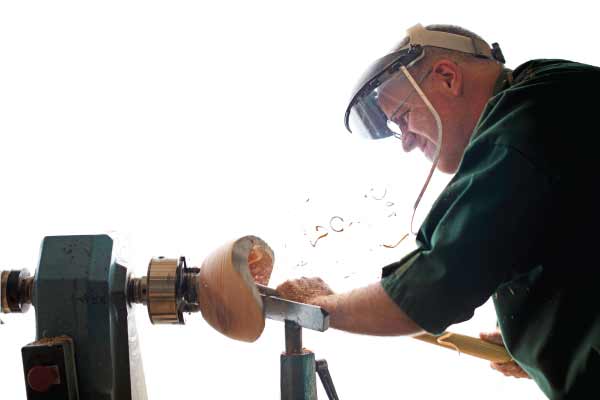 After Hurricane Sandy smashed into the Atlantic seaboard in October 2012, Scott Strobel, an HHMI professor and biochemist at Yale University, expected the call. No, his laboratory wasn’t underwater. Sandy had toppled a five-story white oak tree (Quercus alba) on the New Haven, CT, campus’s Science Hill. University arborists phoned to tell him to get his chain saw ready.

That day Strobel drove his pickup truck away groaning under the weight of a bed heaped high with cross sections of oak trunk. He took them back to his house in nearby Hamden. The oak tree, once a majestic landmark for Yale students and faculty, was gone. Strobel would give its wooden heart a second life, however, transforming it into campus landmarks of a different sort. He would use his woodworking skills to carve the raw wood into unique sculptured bowls and pens. 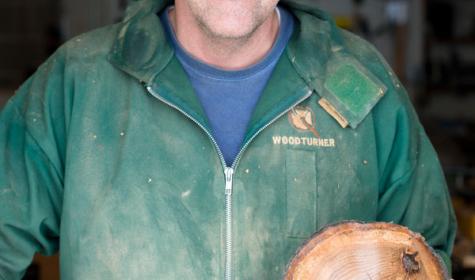 When a tree falls on the Yale University campus, you can bet that Scott Strobel will be paying it a visit. Strobel, an HHMI professor and Yale biochemist, is known for giving campus trees a second life by turning their salvaged wood into handcrafted bowls and pens. Click on image to open full slideshow. Photographs by Sarah Strobel Hill. Produced by Nicole Kresge. 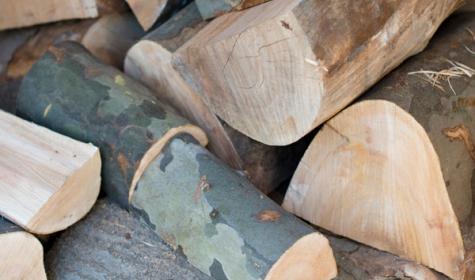 Strobel learns about downed trees via university arborists, word of mouth, and friendly tips from students who refer to him as Wood Guy. He chops the wood and brings it back to a workshop in the garage of his Hamden, CT, house. 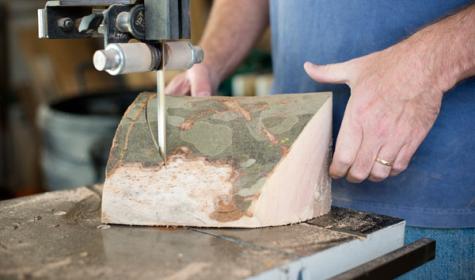 Strobel uses a band saw to create a rough cut. 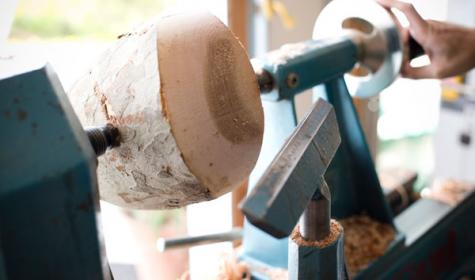 The wood is mounted on a lathe for initial shaping—also known as rough cutting. 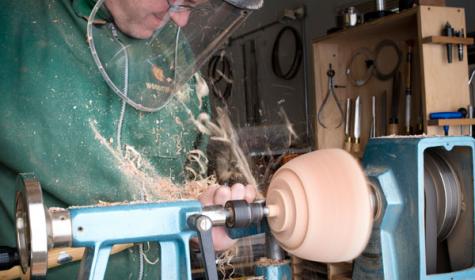 Slowly, a bowl begins to emerge. 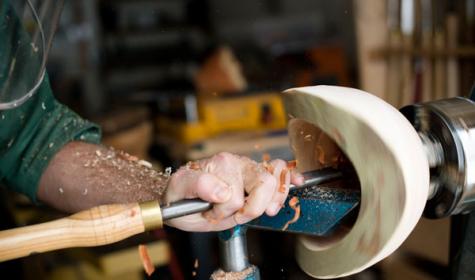 It takes Strobel about 30 minutes to rough-turn a bowl. Finishing takes another one to two hours. 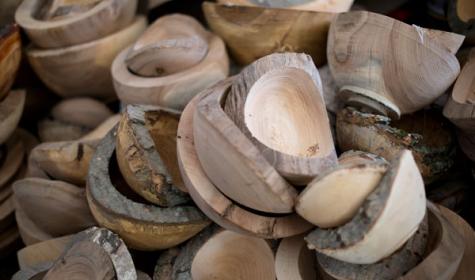 The roughed-out bowls must air-dry for at least 6 months before they can be finished. 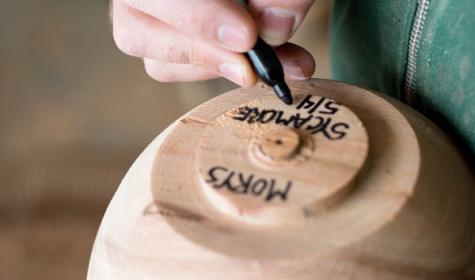 Strobel notes the source of the wood so he can create a certificate identifying the campus location and history of the tree from which a bowl was fashioned. “It’s wood with an address,” he says. “If you know the place where the tree stood, well, here’s something that gives you a memory of where you were.” 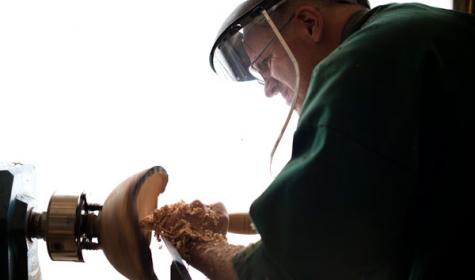 The dried rough-cut bowl is returned to the lathe, where it takes its final shape. Strobel also sands the bowls and applies several layers of sealant. 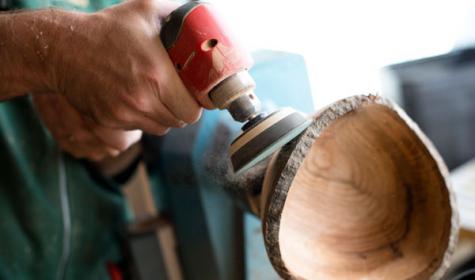 Strobel’s brother, David, and his son, Benjamin, often help with the process. 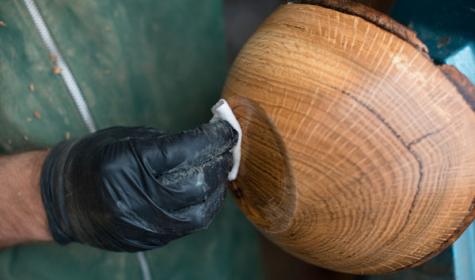 Many of Strobel’s creations end up with friends and colleagues. Others can be found in New Haven retail shops and on Strobel’s website, yalebowls.com. Visiting dignitaries have also been gifted bowls—in 2012, the Yale School of Management presented a Yale Bowl to Israeli President Shimon Peres. This summer, Secretary of State John Kerry, a Yale alumnus, presented one of Strobel’s bowls to a Chinese diplomat. 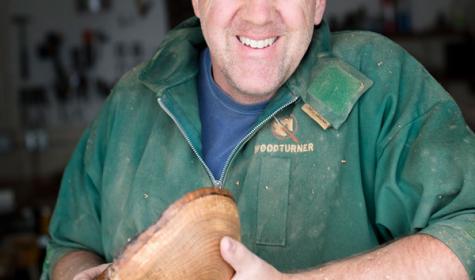 The university gets a portion of each sale, which goes toward planting new trees on campus. This ensures that there will be plenty of trees for Strobel—and others—to enjoy for years to come.

Out of his two-bay garage woodworking shop, Strobel handcrafts hardwood objects, some for use, most for display. All are made from wood salvaged from fallen campus trees. He gives away many of his creations to friends and colleagues; others can find them in a few New Haven shops and at yalebowls.com, a Web business that plays on the name of the Yale Bowl, the university’s National Historic Landmark football stadium.

Each numbered piece comes with a certificate identifying the campus location and history of the tree from which it was fashioned. Yale shares in a portion of Strobel’s sales, which goes toward planting new trees on campus. The rest, he says, “pays for my woodworking tool habit.”

In a turner’s smock and face shield, Strobel stands up to his ankles in shavings hollowed from chunks of wood spinning on his lathe. To exit his shop, he weaves his way among the woodworking benches, power tools, cabinets of chisels and other hand tools, plus slabs of raw cherry, oak, elm, and maple. Scattered about are stacks of roughed-out bowls and pen shafts that must air-dry for months before he gives them a finishing turn on the lathe.

Picking up a roughed-out walnut bowl and noting its mother tree’s former location, he says, “It’s wood with an address. If you know the place where the tree stood, well, here’s something that gives you a memory of where you were.”

Duke University President Richard Brodhead lived at the actual address of the bowl Strobel sent him. As Dean of Yale College in the 1990s, Brodhead had occupied a campus house shaded for nearly a century by a towering oak. He hadn’t heard, but after he moved to Duke, the tree came down. Looking back on it, Brodhead recalls, “Scott saw its sentimental interest [for me]… . So, presto! Using a skill I never knew he had, he turned a fallen tree into a beautiful object.”

Strobel’s love for wood and what it harbors extends to what he calls his “day job.” He directs an HHMI-funded undergraduate course on rainforest bioprospecting and his lab group studies RNA biochemistry and the molecular chemistry of fungi. “Woodworking,” he says, “provides a tangible way for me to express an alternative creative side, different from designing experiments and training students but in some ways the same. I start with materials that are often as raw as they can get and make something beautiful, enduring, and, I hope, meaningful from them.”