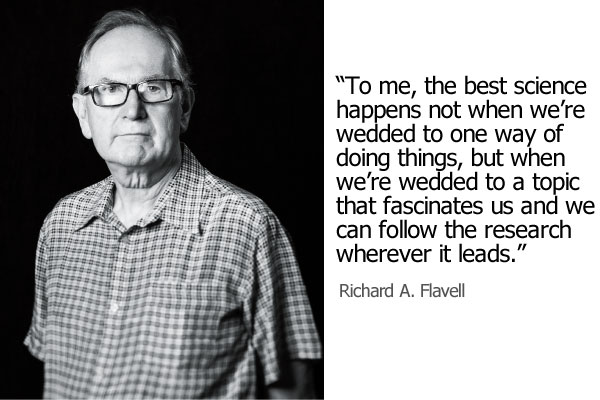 Observation-driven studies have a place in science

Richard Flavell has actively shaped the field of genetics, devising new ways to ask questions about the role of genes in human biology. The HHMI investigator at Yale University does not start every experiment, however, with a hypothesis.

In the second half of the 1900s, biology revolved around forming hypotheses and testing them. The prevalent view was that the only role of observation in this context was to attack or support the hypothesis. As this approach became engrained in biologists’ minds, it led them to teach students a single formula to address scientific problems: First, ask a question and come up with a hypothesis that is the best educated guess as to the answer. Then, design an experiment that tests whether that hypothesis is correct.

My lab group certainly does that kind of work, lately focused on how gut bacteria affect human health through their interactions with the immune system. We hypothesized, for example, that mice lacking a particular set of immune molecules would be more likely to develop colon cancer than other mice. We tested this by genetically engineering mice to lack the immune molecules and determining which mice developed cancer. The data confirmed our hypothesis.

However, we now know that there’s no one right way to do science. Especially in extremely complex or fledgling fields, like the study of gut bacteria, many experiments stray from this formula. Often, we don’t have enough information to formulate a useful hypothesis, or the complexity of the system is not suitable for reductionist approaches. In those circumstances we ask a question that we have no best-guess answer for, and we collect lots of data to find an answer. This is observation-driven science.

We need both observation- and hypothesis-driven research to get a full grasp of a field.

For instance, in my lab we might ask: What is the effect of deleting one or more immune molecules on metabolism or intestinal ecology? Then, we would engineer mice to lack these immune molecules and observe what happens next. We would record changes to the prevalence of gut bacteria, changes to the weight and body composition of the mice, as well as disease, life span, and anything else we can possibly measure. We have the computational power and statistical methods to deal with large amounts of data, so finding useful correlations in experiments like this is possible. And we may discover a connection that we never expected to find—and therefore never would have hypothesized or tested in a more focused way.

We need both observation- and hypothesis-driven research to get a full grasp of a field. At certain times—when a field is new or stuck on a question—observation may be more important. At other times, forming hypotheses and designing targeted studies may be more useful. The kind of observational work common in biology today—collecting large amounts of information—can help scientists see links between biological systems, like the gut and immune system, or genes and their transcripts in given cells, that they might otherwise have missed.

Research on the collection of microbes in the gut, the microbiome, is still relatively new and has taken a more observational approach. The ability to use high-throughput methods to describe the mix of microbes in the gut at any given time has researchers asking broad questions: What happens to the microbiome when an animal’s diet changes? What happens to an animal’s health and behavior when we raise it in a microbe-free environment? These studies have yielded fascinating insights into all the body’s systems and health conditions, including cancer, that might be related to the microbiome.

To shed light on the molecular mechanisms of those connections, we move from observation to hypothesis. If a large, data-driven study reveals that people with inflammatory bowel disease (IBD) have collections of bacteria in their gut that differ from people without IBD, we can begin to hypothesize the mechanism of the bacteria’s pathological effects. For instance, we could hypothesize that the high prevalence of bacteria A in IBD patients explains their disease. Then, we would design an experiment to test that hypothesis, studying whether mice with extra bacteria A get IBD. Moreover, we can modify the bacteria to determine the molecular determinants that trigger disease in those individuals or change one component of the immune system at a time and ask whether it can causally recapitulate the health status we’re interested in.

To me, the best science happens not when we’re wedded to one way of doing things, but when we’re wedded to a topic that fascinates us and we can follow the research wherever it leads. There’s nothing wrong with a lab team doing observational study after observational study. They are still helping advance the science, and likely providing fodder for hypothesis-driven studies to come. After all, the best hypotheses always stem from a collection of important observations.

Richard A. Flavell is chair of the Department of Immunobiology at Yale School of Medicine.

Protein May Have a Good Side in Preventing Inflammation
News