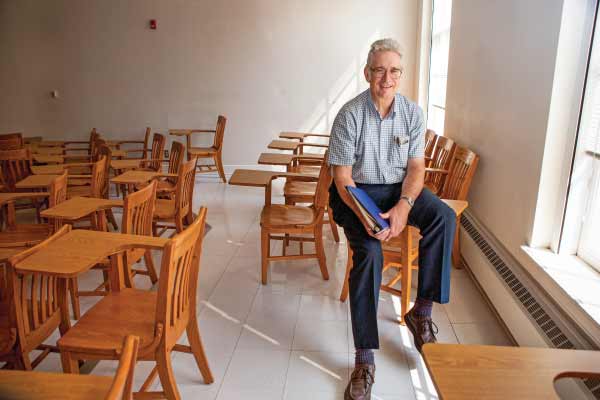 The Guide on the Side
by Richard Saltus

Hal White steers students to attack a problem, figure out how to find the answers, and communicate their results.

Students in Harold “Hal” White’s sophomore biochemistry course don’t lounge in their seats, taking notes while he lectures from the front of the classroom.

They cluster in small groups, heads bent over a real-world problem based on classic research papers. They discuss the science, the historic background, and ethical implications while working to solve the problem before them.

White, meanwhile, floats around the room, like a “guide on the side,” as he puts it, asking probing questions to keep his students on the right track. He swears by this simple but powerful method, known as problem-based learning, or PBL, as a more effective way than lecture and discussion to engage students and stimulate curiosity to discover scientific concepts on their own.

“With PBL, the students ask the questions when presented with a relevant problem,” White says. “They identify and articulate what they don’t know, then go out and find the answers.”

Supported by a series of HHMI education grants since 1998, he and his colleagues have woven PBL through undergraduate science education at the University of Delaware (UD) and beyond. He has held workshops for hundreds of visiting teachers—including more than 100 from foreign countries. Not long ago, he received an email from an instructor at Victoria University in Australia, saying she uses his strategy “with much success” in her art history courses.

With PBL, the students ask the questions when presented with a relevant problem. They identify and articulate what they don’t know, then go out and find the answers.

“Hal has elevated teaching reform and the use of active learning strategies,” says Murray Johnston, chair of Delaware’s Department of Chemistry and Biochemistry. “Students give him glowing marks, and they are very well prepared to go on and are very successful in graduate school.” He earned the 2014 award for exemplary contributions to education from the American Society for Biochemistry and Molecular Biology.

One of White’s problem-based assignments hooks students with the hypothetical case of a researcher who contracts bubonic plague in the deserts of New Mexico. The case description includes information on how selective pressure in the wake of the Black Plague in the Middle Ages led to widespread—but not universal—resistance to the dreaded disease.

He then poses the problem: Assuming you could return via time machine to the Middle Ages with all the tools of modern molecular genetics, what changes in allele frequency resulting from the plague would you expect? And why?

PBL, like White himself, is a product of the 1960s. The method was developed at McMaster University as a model for medical education, like case-method instruction in law, to replace the system of force-feeding massive amounts of factual information to medical students. White was a graduate student at politically active Brandeis University near Boston, where educational and social change was in the wind. It was “a formative experience,” he says. As a volunteer, White tutored Upward Bound high school students in chemistry and math in a Boston neighborhood torn by racial riots.

These influences converged at Delaware, where after a period of research and teaching, White turned to instructional reform with PBL as the cornerstone. He has paid special attention to the academic challenges facing minorities, working with minority students in the university’s NUCLEUS program (funded by HHMI until 2010), which aims to recruit and retain graduate students majoring in science disciplines. “It provides a social network for minority students, who tend to feel isolated at UD,” he says.

In addition to coursework, each summer about two dozen sophomores—many with HHMI support—work in university research laboratories, supervised by faculty sponsors. “We usually have 8 to 10 research publications a year with at least one undergraduate author,” says White. Along with the experimental procedures they learn, the students meet weekly to explore issues like career paths, scientific misconduct, and communicating about science.

White serves on the leadership team of the university’s Institute for Transforming Undergraduate Education, which is directed by English professor Stephen A. Bernhardt. Bernhardt is impressed with students who’ve come out of White’s sophomore biochemistry course. “They’re fearless when it comes to approaching a difficult research article from a scientific journal. They talk about how Hal has influenced their learning—teaching them how to ask questions, how to seek answers, and how to write and speak clearly about their knowledge.”

As he begins to think about passing the baton to younger faculty, White continues to guide Delaware’s approach to science teaching. He serves on a steering committee that is giving more weight to math and quantitative methods in biology teaching at UD, to better prepare students for careers in life sciences research. The university now offers a bachelor of science in quantitative biology. “This degree provides an option for students trained in math to apply it to biological problems,” he says.

White is also brokering discussions among chemistry and biology faculty to integrate instruction and labs in the two historically separate fields; this movement is supported by HHMI funding in its latest grant and will affect an estimated 400 to 700 students a year. The plans include smaller classes, more team-based learning, and “a more active, problem-focused approach,” says Bernhardt. “Hal has provided both the vision and strategy to make this happen.”