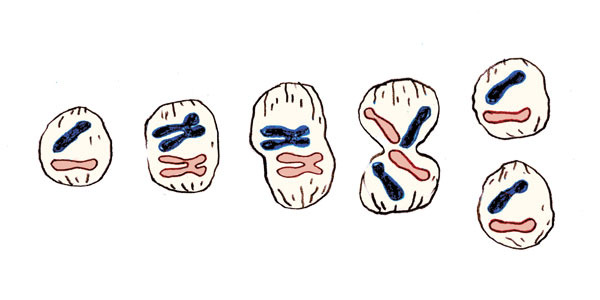 The Geometry of (Cell) Division
by Nicole Kresge

During development, a cell needs to know up from down and left from right. For example, a disoriented hair follicle could produce hair growing into, rather than out of, the body. HHMI Investigator Roel Nusse has shown that a localized source of a signaling molecule called Wnt3a coordinates orientation in a dividing stem cell.

The effects of the localized signal were clear, according to the team’s March 22, 2013, report in Science. The stem cells all divided in the same way, with the plane of division occurring perpendicular to the location of the incoming Wnt signal. Furthermore, the daughter cell closest to the bead retained the characteristics of an embryonic stem cell while the more distant progeny cell began to differentiate into a specialized cell. “That makes sense,” Nusse says, “because the Wnt signal is important for stem cell fate, and the lack of a Wnt signal would allow the distal cell to differentiate.”

Next, Nusse and his team will try to uncover the molecules that help Wnt orient cell division.